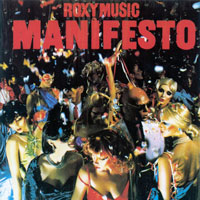 Though they don’t exactly fly out of the used bin like the early records, a strong case can be made that Roxy Music’s “second act” releases are, in their own way, just as singular and compelling as their genre-defining early efforts. Manifesto was the first Roxy Music album to emerge after a four-year hiatus that saw most of the group venture off into solo territory, with mostly satisfying results. Still, a lot had changed in the time they’d been away. Disco’s four-on-the-floor pulse had fully asserted it’s dominance of mainstream pop music, conveniently, right around the time the earliest drum machines were appearing on the market. Never ones to be left in the dust, Roxy managed to embrace the new zeitgeist without sounding cloying or desperate. Manifesto succeeds on it’s own terms, somehow compelling the old, brittling skeleton of their art-rock roots to support new, unfamiliar flesh.

Opening with the disco-ball pulse and crawl of the title track, Ferry and crew come out of the gate (quiet) storming, as if they’d never been away. The deep groove is completely in step with the times, while retaining the subtle menace and mystery that touches all their best work. Ferry sounds both acutely aware of their potentially precarious position as would-be-elder statesmen entering a new era, and characteristically blithe in the utter confidence that he and his band will sail through unscathed to victory. After an extended intro, Ferry finally struts into the mix, ready and willing to silence all naysayers, intoning “I am for a life around the corner/that takes you by surprise/that comes and leaves all you need/and more besides.” Manifesto, indeed. —Jonathan