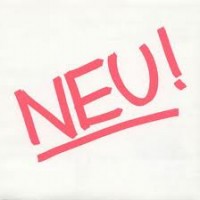 Rock as ambience, stripped of song but retaining the simplicity of a good hook, Neu! marks the meeting point of acid-dazed psychedelic improv and post-classical minimalist composition. “Hallogallo” and “Negativland” are this album’s supreme achievements: the former synonymous with the now oft-used rhythmic term motorik, the latter combining this metronomic minimalism with a jarring musique concrete that incorporates industrial noise, transforming the group’s dreamlike drone into something more tonally consistent with a nightmare and anticipating everything from Joy Division’s Unknown Pleasures to Scott Walker’s Tilt. In between these two highlights is the cymbal-drone experiment of “Sonderangebot,” the hazy, beautiful ballad-like “Weissensee” (which in a way anticipates the minimal, atmospheric post-punk of albums such as Seventeen Seconds by the Cure), and “Im Gluck,” whose studio-simulated rippling water is both restive and unsettling. The closing track, “Lieber Honig,” is an odd shift in tone that introduces fragile vocals and arguably constitutes the one misstep—though that depends on your mood. And mood is the crucial element to appreciating this album to its fullest. The group’s use of the studio to create a unique space in which to listen is what is most impressive about Neu! The spatial organization of the instruments gives breathing room in which the attention is allowed to drift from one part to another, actively constructing the sound of the whole and making for a different listening experience each time.

Obviously one of those proverbial albums that sold next to nothing but inspired those who heard it to make their own records, this also bears influence throughout the music since, its unique spell cast over just about everything good that followed it. —Will