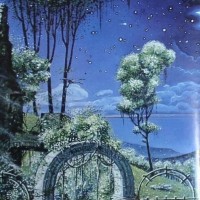 The self-titled debut from this New York group Masters of Reality (1988) traverses between Black Sabbath (hence the title), Cream and AC/DC with a touch of the Doors and Beatlesque wit. Produced by studio marvel Rick Rubin and some additional help from founder/vocalist/guitarist Chris Goss, this is one the most creative rock records of the eighties. While it garnered some success on college radio it never really rose above cult status. Three years prior to the release of Nirvana’s Nevermind, bands like REM were already beginning to usher in a welcome change from the hair spray and glitter metal of the eighties with jangly guitars and folk sensitivity delivered with a punk rock aesthetic . Masters of Reality were responding to the bloated extravagance with a record full of bluesy psychedelic embellishments by crafting hefty guitar riffs, some refined piano/organ passages along with Goss’ sultry voice-who sounds like a cross between Jack Bruce and Jim Morrison.

The songs, all penned by Goss and guitarist Tim Harrington, contain varying subject matter ranging from hookers (The Candy Song) to hippy giddiness (Getting’ High) alongside the stream of conscious (Doraldina’s Prophecies). In addition to Goss/Harrington’s clever songwriting, they have a cohesive band

to set the words in motion. There’s the swampy steel string slide opening to the electro-folk anthem (John Brown), some fuzzy blues licks on another cut (Sleepwalkin’) and a jump blues acoustic number (Lookin’ Too Get Right). There’s also an ominous, almost doom metal guitar interlude tucked in the middle of the record (Theme for the Scientist of the Invisible). Another high point is the classical piano intro that leads into the heavy prog leanings of the album’s closer (Kill the King). There are plenty of other gems on this record as well; all mixed with quirky pop structures mingled with obscure lyrics and some serious rock-n-roll making this record a misplaced archetype. –ECM Tim