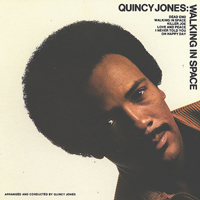 After a few year period of releasing film scores in the mid sixties, Jones entered the studio and recorded Walking in Space (1969); an electric/acoustic/ jazz/funk/big band record produced by his friend, the great Creed Taylor of CTI records. With jazz luminaries Roland Kirk, Freddie Hubbard and Ray Brown (and a few other heavy hitters of the time), Jones conducts, arranges, and rearranges a handful of tunes from the stage along with some standards.

Side one is made up of two tracks from the Broadway hit “Hair” (Dead End, Walking In Space) funked up with swagger and velvet shag. The record begins with Ray Brown’s walking bass settin’ it along with some electric piano chiming it up and rim shots galore- some muted trumpet and flute phrases establish a simmering melody, then the brass section enters along with some electric guitar jabbing from Eric Gale. The title track begins similarly; Hubbard breaths more muted sounds from his horn while Roland Kirk’s tenor slithers around it only this time it lasts a bit longer as a female vocal section sneaks in giving the track a swanky lounge vibe. As the tempo increases, Hubert Laws cuts through with a whispery flute solo eventually giving way to some muscular statements from Eric Gale and Roland Kirk- a standout number.

Side two begins with a cool rendition of Benny Goldson’s “Killer Joe” (some feel this is thee rendition). Hubbard blows his muted trumpet over a medium sized brass section with some understated guitar fills throughout, more sexy vocals come in and sing the chorus – imagine if Ellington’s orchestra were to cover Miles’ “So What” with a plugged in rhythm section and the backup singers from Sergio Mendes’ Brazil ’66-you get the idea. Another highlight is from Toots Theilmans, who shows up with harmonica in hand for a fractured and somewhat abstract harmonica solo on one track (I Never Told You). The Album closes with an eighteenth century gospel standard (Oh Happy Day). A gospel choir sings the chorus while Hubert Laws answers the vocal phrases with his flute; you also get the rarity to hear Ray Brown really get down on electric bass on this cut.

Jones created some probing instrumental music on Walking In Space. Supported by a cast of stellar musicians-from the grooves to the smooth backbeats it was an absolute perfect fit for Taylor’s slick productions and definitely one of the strongest records in the CTI catalog. – ECM Tim