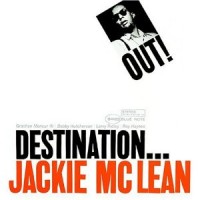 Based on the title, I was expecting some blistering, fast-paced jazz, probably dominated by squalling saxophone and so on. For those of you who have listened to Destination Out! already, you will know that I found this not to be the case. Perhaps I should have taken more heed of the exclaimation mark, because in many ways I can draw similarities between what Jackie does here and what Eric Dolphy was doing on Out To Lunch! Admittedly, this tends not to have the skronkier qualities of that album, but firstly, the replacement of piano with vibes is obvious, and then there’s the combination of weird, staggering music that’s somehow also really accessible and exuberantly fun to listen to. This is often cited as a pretty essential jazz album, especially in the context of post/hard bop, and honestly, I can really say it is. There are few albums which really nail experimentation and accessibility at the same time, but the sophisticated and restrained, often atmospheric playing on Destination Out! means that even with the odd rhythms and wonderfully wonky playing this is still a pleasure to listen to over and over again. A classic. —Timmay