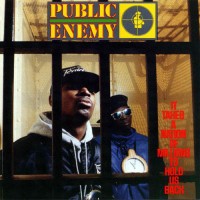 There’s a reason why this album is consistently listed near the top of any list of great albums, hip-hop or otherwise. The layered production and album’s thematic cohesion represented a quantum leap over anything that had been released in hip-hop to that point. Yet, it doesn’t sound the slightest bit dated (like, for example The Chronic) because no one was able to emulate the Bomb Squad’s sound the way that G-Funk or RZA-style production were constantly bitten years later. The result is an album that was monumentally important at the time of its release, and still just as fresh and jaw-dropping nearly 20 years later.

It Takes a Nation of Millions to Hold Us Back is the definitive group statement from one of hip-hop’s greatest acts. Chuck D is a true force on the mic, but PE doesn’t get by on his skills alone, though they certainly could. Despite rhymes that convey his considerable intelligence, he has a presence on the microphone that has rarely been matched. Even if he wasted his flows on cookie-cutter battle raps, he could do so convincingly. Fortunately for us, that isn’t the case. Flava Flav, far from the caricature he is now, provides the perfect foil for Chuck. Abrasive and wild, he underscores all of Chuck D’s statements like an exclamation point. Meanwhile, Terminator X and the Bomb Squad propel the backing tracks into the stratosphere with a constant barrage of samples, scratches and funky beats. Constantly self-referencing, the music here is dense and complex, adding to the epic feel of the album (though it runs just under an hour). Not to mention, they have the best song titles in all of music: “Black Steel in the Hour of Chaos”, “Terminator X on the Edge of Panic”, etc.

I am usually a little wary of artists that are this overtly political, and I always thought that Ice Cube traveled too far down that road, for example. With PE, however, the politics only add to the urgency of the album. It doesn’t hurt that Chuck D is typically right on with his lyrics. It also doesn’t hurt that all of the themes touched on (drugs, war, police, the justice system, etc.) are always relevant.

To say that It Takes a Nation… is a good rap album with a couple of classic tracks would be a gross understatement of this album’s value. This is a masterwork, and nearly every other track has become a standard (“Rebel w/out a Pause”, “Bring the Noise”, “Night of the Living Baseheads”, “Don’t Believe the Hype”, “She Watch Channel Zero?!”…). No filler. The consistency is staggering. In fact, at first listen, the record can be a little intimidating, since there aren’t any concessions made in the effort to vary their output or spawn a hit single. Chuck D even anticipates that they won’t have commercial success in his line: “Radio stations/I question their blackness/They call themselves black/But we’ll see if they’ll play this.” Multiple listens reveal more and more of what Public Enemy has embedded into this startling effort. Any fan of hip-hop who doesn’t own this album needs to. As does any fan of music who has dismissed hip-hop as anything less than a vibrant art form. —Lucus