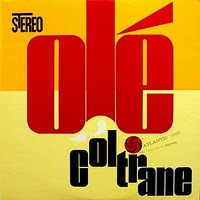 Wow! I’ve been looking for the perfect Coltrane album to match my taste and here it is. Some people might say that the title track is very similar to Sketches of Spain by Miles Davis, but I also detected a hint of music from Tijuana Moods by Charles Mingus. Of course, nobody would dare mention Mingus. ;) That aside, this is beautiful jazz. Coltrane’s plays extremely well on soprano and tenor sax. When I saw the rest of the lineup for Ole Coltrane I knew it would be one of my favorites. It was definitely a stroke of genius to mix these two bassists. The interplay between them is incredible throughout. What’s great is that Coltrane steps back and lets the others shine. While everyone plays admirably, in my opinion it’s Eric Dolphy that steals the show. He pretty much steals the show on every album that he appears. When he plays a solo on the alto sax, you can almost feel him reaching into your chest and squeezing your heart. Even the extra track, “To Her Ladyship”, is great. Don’t forget to pick this album up. It would be a serious loss. –Rob