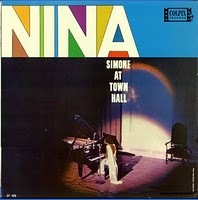 Nina Simone at Town Hall is a magnificent showcase for one of music’s most versatile talents. Simone’s voice is remarkably expressive, but it’s not enough to have a strong instrument. It’s her ability to utilize her instrument for maximum effectiveness that makes her one of my favorite singers. On this live performance, she mostly explores the somber range of emotions, with unfaithful lovers being a prominent cause of the sorrow. On “I Don’t Want Him Anymore”, Simone sings volumes of emotional back-story into a six-minute song. At first sounding resigned as she gently spurns her lover while confronting his mistress, she goes on to outline the many ways that she adored him. Instead of bitterness, she betrays her true feelings of devotion as she recounts each small act of love, only to again ironically claim that she doesn’t want him anymore. The heartbreak is palpable, as it is on the song “The Other Woman”, which cleverly inverts our expectations by spending the back half describing how devastating it is to be the home-wrecker, not just the betrayed wife. Although Nina is widely recognized as a gifted singer and interpreter of songs, she is equally adept as a piano player, an attribute which is largely overlooked. Here, with minimal accompaniment, she really shines in this regard. Her playing is some unlikely hybrid of jazz, blues and classical, in which every note is as carefully played as her words are sung. This is a tremendous album for lovers of vocal jazz or torch songs. It’s definitely a late night album, due to its intimacy and the way it rewards your complete attention. Highly recommended. –Lucas