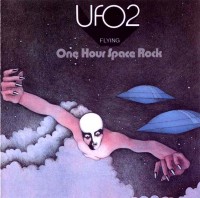 Taking a break from all your Free Jazz and Krautrock to dig up some old cheap Hard Rock can often be rewarding. Especially when you pick up an album like UFO’s “Flying”, because the term Hard Rock can be a bit misleading when it comes to finding mind-bending material like this.

The ground these guys cover is just amazing, and that’s not a pun on just how spacey their brand of rock can be. What starts off as a straightforward assault on “Silver Bird” later gives to the nearly twenty minute “Star Storm”, which features some flexible rocking that will make you think Thirteenth Floor Elevators one moment, Ash Ra Temple the next and at one point even Land of 1000 Dances! UFO also used the studio as an instrument to create some serious panning, which makes this record ready for a nice stereo or a good pair of headphones.

If side one doesn’t make you consider that these Brits did just as well as their more hep Avant counterparts in Germany just yet, then keep going. Muted guitar plucks anticipate a proto-punk rhythm section that absolutely sears once they fall in on “Prince Kajuku” and then it’s time to flip to side two.

Strangely, side two starts with “The Coming of Prince Kajuku” which seems a bit backwards, but the rocking here is solid and it’s probably the most direct track on the album… To counterpoint that, you reach the crown jewel of this LP, “Flying”. The track is one long space-blues downer that goes hard and seems set on staying that way… until you hear the cowbell. Studio use with panning is once again prevalent, as well as delay and reverb, but it never handicaps the tune. Quite the opposite. The production throughout this whole record is great as a matter of fact, from the warm full bass tone and crisp cymbals to the often desired incendiary guitar sound that avoids cheese.

Early UFO albums could fall somewhere between Hawkwind and Iron Butterfly, but “Flying” in particular punches in a lot of styles that will definitely surprise. -Wade