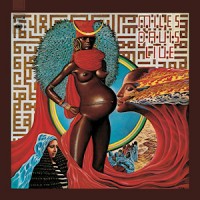 Ah, the magic of 70’s Miles is timeless. And while some would claim “On The Corner” to be his best disc produced by the ace Teo Macero, I’d voice that “Live – Evil” has got it beat by a mile. Cut up from a number of performances in a seamless fashion, maybe inspired equally by the Dead and Hendrix, Miles and company plus John McLaughlin produce spacious skeletal rhythms, full-on extended funk medleys, feedback tinged segments that never meander and short, affecting balladry.

Opening track “Sivad” spills out immediately in a gush of percussion and slows down a touch to show off the new bastardized, amplified direction of Miles work. “Little Church” and “Selim” go solo-less, with each track being surprisingly pastoral, melancholy. Those last two cuts are by Brazilian composer and multi-instrumentalist Hermeto Pascoal, who went on to play with Davis, and they stand as some of the best highlights on this disc.

Also worth mentioning is the great panoramic interplay between McLaughlin and Davis on the side one closer “Gemini / Double Image.” Sounds like a walk home from a particularly hard night and not far off from what today’s noiseniks might try to emulate (with a bit more high end), only by way of swapping instruments for an array of effect pedals and industrial clangor…

Go on? James Brown might be cited just as much as Hendrix for influence on “What I Say” or “Funky Tonk,” syncopation minus the vocal commands. Miles is really modern and on top with this piece, he runs the voodoo down and his synthesis of styles works well… Critics of the day wouldn’t call it jazz; but who needs a label for it when it’s so ahead of it’s time? Miles ahead, as usual. -Wade