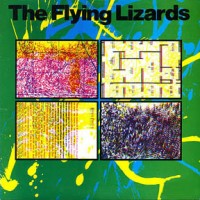 London was home to many interesting musical artists of the late 70s, and The Flying Lizards may be one of the most shadowy outfits of the day. Made up of experimental musicians interested in pop music, their ranks included emerging music journalists David Toop and Vivien Goldman (the latter being a sort of Marianne Faithful type) and a number of improvisers.

On this self-titled debut, excursions into dub, sound collage and dressed down disco make a great backing for frilled or deadpan lyrical deliveries. “Her Story” simply describes itself as a love song with no need for further investigation, while “Russia” just lets the beat ride, sounding a bit like a Talking Heads “Remain In Light” outtake.

While the Lizards do experiment with pop forms, one of their only efforts to succeed at charting was their enigmatic cover of “Money.” Quote unquote singer Deborah Evans stripped down monotone delivery is prominent and in stark contrast to the shambling instrumentals and backing run-down by the Lizards, turning the cover into a cult favorite. It even meanders into an extended, dubby, musique concrete mess of sorts.

Many members of the Flying Lizards dispersed further underground or into obscurity. This debut is a real lynchpin of new music from post-punk London and still sounds exciting today. -Wade