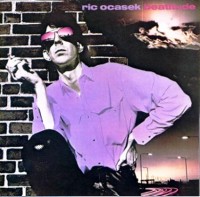 Very much a studio creation and a work evoking distillation and sanitation, “Beatitude” might as well be Ric with Kraftwerk as his backing band, if they’re willing to add stadium-worthy guitar, lovers bass and shmoozy sax all over. Since The Cars made a bit of a weak Rock effort (with a capital R), going New Wave was probably Ric’s most viable option, and it has to be said, he didn’t hold back during his solo year.

A drum machine (affectionately named “Miss Linn” in the liner notes) beats metronomically, and a series of vocoder chirps kick off Ric Ocasek’s first solo effort. Seems like a great foil for his brand of punchy New Wave… “Jimmy Jimmy” and “Prove” are pure electro-pop nuggets of the freshest variety. And “Connect Up To Me” looks like it would fit next to Gary Numan’s “Cars” or anything by Wang Chung on FM band. Well, maybe a radio edit, it’s all sequencers and drums with Ric riffing over chimes and crisp keys, going for about seven minutes plus… It’s not even a dance track, necessarily.

This is New Wave in it’s truest capital form, far from the streets, floating somewhere in space. Interestingly enough, it’s when New Wave as a genre gets further from it’s source material (punk template, let’s blur no lines), when it’s clean, detached and empty, that it really becomes it’s own thing. Play this with Gary Numan’s “Dance” or Japan’s “Gentleman Take Polaroids” for maximum posh. And watch out for rockets! – Wade