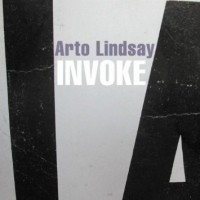 A culmination of noise, Bossa Nova and The Face have wrought the career of “pop musician” Arto Lindsay. He made a big splash as one of New York’s favorite noisemakers in the three-piece of DNA. His Latin roots set in more firmly later on, when he fronted Ambitious Lovers and began work on his solo albums.

Arto became comfortable making sultry Brazilian music and made exception to cover Prince’s “Erotic City” plenty of times in the 90’s. “Invoke” shows Lindsay treading new ground away from his jet-setting idea of soul and into cerebral mood music of sorts… With his newfound confidence in sampling abilities, he plays with these forms as much as he did earlier with Brazilian crooning and detuned guitar. It’s a pretty tall order, but in Lindsay’s hands these styles come together well. Not that he’s some fancy fashioner; Arto remains earnestly self-taught and his stints in North and South America lead to genuine results and a modern, international sound.

The real standouts seem to sound as lush as luxury in NYC. “Ultra Privileged” and “You Decide” are bright tracks of mood music. Arto’s signature guitar work has been subdued from terrible noise to playful chirps, asserting itself into many song rhythms. More a studio effort than a document of his live abilities, “Invoke” is, in short, an Arto album to hear while drinking wine and wearing silk pajamas, particularly with a hip lover. -Wade