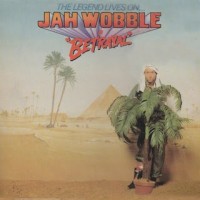 The first big solo effort of Jah Wobble would be the pronounced reason he got the boot from PiL under orders from long-time buddy John Lydon. There was probably word of build up to the acrimonious departure, but it would depend on who you asked. Apparently Lydon didn’t like the fact that Wobble’s album used pieces of scrap from Metal Box, and pulled the trap door.

Funny really, considering PiL was meant to be an umbrella for all sorts of weird, vague projects that tended to never, ever get made. Wobble went and did it though, and it’s even funnier because what little fragments do come from Metal Box / Second Edition were all just fragments to begin with at that point. Punks in the studio using whatever they could fashion together as avant-garde.

But the results of Wobble in the studio go far beyond dub-edits of older PiL material; some songs are actually full of dubbed up love like on “Beat The Drum,” and an eccentric and unexpected cover of “Blueberry Hill” make for great bits on Side 1. On the flip there is a featured female vocalist named Snow White who performs on the odd “Tales From Outer Space” and the great disco track “Today Is The First Day of the Rest of My Life.” Who knows where she went off to after cutting the record.

Wobble arranges just about everything and it’s obvious that like PiL he’s not about to sit in one place when the studio can take him anywhere. Unlike PiL, more World music influence is heard in earnest fashion compared to oh say, the Wobbless “Flowers of Romance” by Lydon and the remaining PiL founders a bit later. And by then they were scraping the bottom of the barrel. -Wade