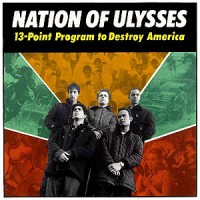 Self-aware and theatrically coming off as far-left wing nutcases, Nation of Ulysses was a short lived band that burned brightly for the Dischord label into the 90s. Ian Svenonius, as ringleader and intense frontman, comes across as just that on recordings set to match their legendary and ecstatic live performances.

“13-Point Program To Destroy America” is, at it’s core, made up of a belief system stemming from juvenile delinquent behavior and leftist radicalism, but the mashing of these views is comedic and not overly serious, except maybe in their instrumentation. Their roots are in D.C. Hardcore, but at the turn of the decade most groups in the area had become more harmonic… Nation did this, but listening to a heap of free jazz records might have also led them down more interesting avenues. Svenonius even picked up a trumpet on some tracks. Whether he plays like a jazz man is up for, uh, debate. I’d say not, but he’s a great noisemaker.

The album is really two minute blasts most of the way through (“Spectra Sonic Sound,” Ulythium”), with some slower numbers including the mocking “Diphtheria.” It’s a song against, of all things, eating sweets, which really shows straightedge ethics held up to ridiculously high standards. This was when kids in the scene were going so far as refraining from caffeine consumption… It was time for a laugh. -Wade