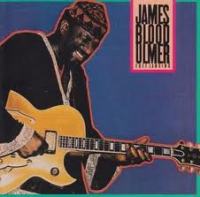 After releasing his solo work “Are You Glad To Be In America?” through Rough Trade instead of say, ECM, the direction of his work grew more technical but remained engaging after his jump to Columbia. And he didn’t lose what he had going on with the post-punk label: innovation and a feeling of warmth throughout despite his unique brand of guitar flaying.

If you see live clips of Chick Corea in 1986 with his “Elektric” band, or other fusion bands of that time headed by Miles, and your only major turn off is the electric keyboards sounding like the audio equivalent of stale cheese, then “Free Lancing” will work for you. Ulmer’s band is electric, but it operates how a crack jazz/funk/rock outfit should. The heavy bass pops and acts as the main rhythmic component, James sings over his precise scratching and scrambling, and the drums embellish when they don’t drive the most memorable track, “High Time,” to the conclusion of the first side.

Loved by Ornette, post-punk art schoolers, rock enthusiasts and fans of Hendrix’s cross-town traffic music in general… well let’s put it this way, the material you hear on “Free Lancing” was the same stuff they would flaunt in front of Captain Beefheart and PiL. You can consider it a treasure of the era that occupies it’s own space. -Wade