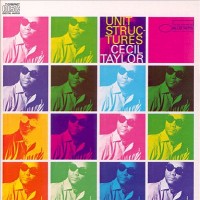 Atonal to the nth, but Cecil Taylor was probably the most classically trained and proficient player in Free Jazz at the time. Miles Davis said reviewers were crazy for their rave-ups, and claimed they were drinking too much coffee. True, Cecil here isn’t in full tumult mode so much as providing foundations for his players at hyper velocity. And later recordings would have less players or have him solo, showing off the man’s real soloing potential.

That’s what we have in “Unit Structures” in most cases; grounding that appears as quickly as it’s replaced for his associates to blare across. It takes about half of the first composition “Steps” before room is given for Cecil to play in some negative space of his own, while two bassists give color to his building blocks of sharps and flats.

Listening to this, “Conquistador” or any material to come later, it puts a grin on my face to think he played for President Carter in the White House. What a treat! -Wade