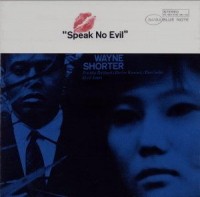 Featuring fresh members Herbie Hancock out of the Miles Davis Quintet and Freddie Hubbard on trumpet, Wayne continues his ideas in hard bop that he had done so well in previous work. However, Miles influences rub off as much as Coltrane had previously on him… The music is still as modal as it was on “Juju” and reminds us of his work on classic Davis releases.

In fact, shades of more classic Miles and Coltrane make up much of “Speak No Evil,” while Davis and Trane themselves were going down more precarious avenues in the mid-Sixties. That’s no slight on Shorter though, who makes fine compositions. Elvin Jones drums here but he’s kept in check, anchoring the rhythm section diligently. Bassist Ron Carter comes from Eric Dolphy’s world and is a good foil for him.

Wayne delivers an extension on the sound that Miles was known for before his forays into electric music. This was also a few steps before Wayne would get more involved with fusion himself in Weather Report… “Speak No Evil” is a great sixties Jazz album, looking back but contemporary in the best ways, sporting a talented mix of players. -Wade