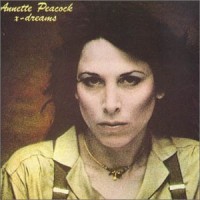 “My Mama” is a tour de force of Peacock’s offbeat storytelling and innuendo prowess and surprising vocal shifts, from arena-ready belting to pillow-talk whispers. She relates how her upbringing didn’t predispose her for domesticity but rather for independence and sexuality. The backdrop is subdued funk rock in a tricky meter. “Daddy never taught me how to suck-seed, that’s why I’m so crazy crazy crazy,” she intones. “My destiny’s not to serve/I’m a woman/My destiny is to create.” Here’s your unsung ’70s feminist anthem.

But wait—it gets better. “Real & Defined Androgens” stands (or lies) as one of the sexiest songs ever written. This is low-slung, dangerous funk that would just as soon knife you as fuck you; maybe it’ll do both simultaneously. Peacock again flaunts her vast range, mostly reciting detachedly erotic lyrics in slow, seductive Sprechstimme, but occasionally blossoming into full-on testifying-Aretha Franklin mode. The music gradually intensifies into a madly thrusting yet controlled freakout haloed by a wild sax solo and laced with insanely cascading keyboards. “Real & Defined Androgens” is a perfect fusion of male and female energies and unlike anything I’ve ever heard… and I’ve heard a lot, because I’m old and obsessive.

Side two simmers with sophisticated, romantic jazz-pop ballads that feature Peacock using her most conventional crooning voice, with intermittent sensuous spoken-word passages to heighten the intimacy. There’s also a cover of the Otis Blackwell-penned Elvis Presley hit “Don’t Be Cruel” that Peacock smooths and accelerates into a Steely Dan-like, limousine-funk glide. The musicianship throughout X-Dreams is impeccable, featuring King Crimson/Yes drummer Bill Bruford, guitarists such as Mick Ronson, Chris Spedding, and Brian Godding (Blossom Toes), plus many other studs. It’s all very… nice, but the real thrills come hot and heavy on that opening diptych.

Thom Jurek summed up the record well on allmusic.com: “[X-Dreams] still sounds a bit ahead of its time. Peacock may have been wringing her own personal exorcism from these tracks, but for the rest of us, she offered a guidebook of complex emotional terrain, a treatise on the messy state of love, and a musical dissertation on how to integrate the nuances of form in rock and jazz.” -Buckley Mayfield