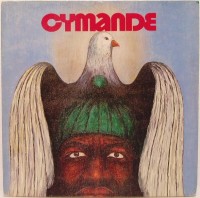 Here’s a stone-classic album that’s still not widely known enough—even with its uplifting funk track “Bra” being sampled by De La Soul on “Change In Speak” from 3 Feet High & Rising and appearing in Spike Lee’s 1994 film Crooklyn. (Hip-hop and electronic-music producers have sampled Cymande at least 77 times, according to who-sampled.com.) Cymande put out three strong albums (I’ve not heard their fourth, Arrival), but their debut is the best, if only judging by how often I play tracks from it in DJ sets. It’s one of those rare funk full-lengths that you can play from start to finish without lifting the needle off a tepid ballad.

But to call Cymande merely a funk band is inadequate. The English nonet—who featured musicians from London, St. Vincent, Guyana, and Jamaica—also incorporated jazz, reggae, calypso, and progressive rock in their inspirational tracks, and such hybridization resulted in highly flavorful material that is bathed in a spiritual glow that can’t be faked. Cymande call it “nyah-rock,” which they describe in the liners as “the music of the man who finds in life a reason for living.” I’ll say.

Side 1 is largely mellow and meditative and marked by Patrick Patterson’s fluid guitar ruminations, Steve Scipio’s lithe bass lines, Mike Rose’s circuitous flute motifs, and Ray King’s soulful vocals that carry subtle hints of Caribbean patois. LP opener “Zion I” is the exception: a spiritual reggae tune with righteous massed vocals and a bass line on which you can trampoline.

Side 2 is where Cymande really shines. “Dove” (sampled by the Wu-Tang Clan in “Problems” and the Fugees in “The Score,” among many other places) is simply one of the greatest pieces of music ever waxed. It begins in great intrigue, Patrick Patterson’s guitar modulating a Santana-esque wail, setting the scene for Steve Scipio’s world-beating, sidewinder bass line to lift the track onto a higher, more libidinous level. Stealthy, undulant funk beats and blissed-out “la la la la-la”s contribute to making the 11-minute “Dove” one of the ultimate sex jams. The aforementioned “Bra” is simply one of the most joyous pieces of music ever waxed. The next time you’re really down, play it and feel your worries dissolve amid its levitational rhythms, percolating congas and bongos, and triumphant horn charts. “The Message” is more subdued, but no less seductive with its nocturnal funk strut. “Ras Tafarian Folk Song” is definitely the album’s weak link, but that could just be my bias against religious belief systems talking. Thankfully, it’s over in three minutes. Everything else on Cymande, though, deserves to be blazed into your memory banks till your last breath—especially “Dove.” -Buckley Mayfield