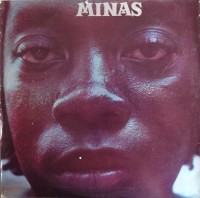 Some albums just ooze a singular atmosphere and vibe that transcend language or rational thought. Milton Nascimento’s Minas is one of those albums. A Brazilian singer-songwriter who boasts a commanding, supple vocal style, Nascimento has collaborated with many prominent American and English musicians (Wayne Shorter, Paul Simon, Herbie Hancock, Quincy Jones, Peter Gabriel, Jon Anderson, Cat Stevens, and, uh, Duran Duran), yet his own records aren’t that well known here. But among the record-collector cognoscenti, he’s revered as something of a prog-folk-soul genius. You could think of Nascimento as something of a South American Tim Buckley, but even that doesn’t quite nail his special talent.

My Brazilian import copy of Minas contains scant info about the recording, but maybe not knowing every detail of it somehow enhances the listening experience. Savor the mystery! Milton sings in Portuguese, a wonderfully musical language that has a warm, tranquilizing effect on me. He enlists a children’s choir on a couple of tracks, which is one of my least favorite ploys, but for some reason it’s not as cloying as usual in Nascimento’s hands. Much of Minas is deceptively beautiful; most of the songs here don’t immediately stun you, but rather over repeat listens their oddly alluring contours begin to make sense and trigger your pleasure centers. By the fifth listen, you’re convinced Minas is a classic song cycle as devastatingly moving as Buckley’s Starsailor, Joni Mitchell’s The Hissing Of Summer Lawns, or any of Scott Walker’s first four solo joints.

Minas‘ highlight is “Fé Cega, Faca Amolada” (which Royal Trux, of all people, reverently and authoritatively covered; look for it on their box set Singles, Live, Unreleased). Co-written with Ronaldo Bastos, this song finds Milton trading unbelievably expressive vocals with Beto Guedes as the music flares and lopes with balletic grace and soulful buoyancy, like some superhuman strain of tropical pop whose rewards will never cease. I’ve no idea what they’re singing, but the vocalists convey powerful uplift, and that lump in my throat is real. Someone at the usually trustworthy Dusty Groove site noted about Minas that “the backings have a positive, triumphant quality that’s extremely upbeat and bright, yet without sounding commercial at all.” This is accurate. Nascimento and his cohorts gently unleash a new kind of beauty on us here and we should all devote a good chunk of the rest of our lives to luxuriating in it—language barrier be damned. -Buckley Mayfield