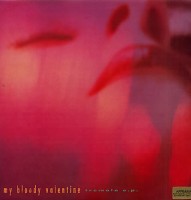 This four-track EP was like a coming attraction for the monumental, instant-classic LP that came out a bit later in 1991, Loveless. Although it’s generally overlooked in comparison to its successor, Tremolo actually contains some of My Bloody Valentine’s greatest compositions.

“To Here Knows When,” of course, appeared on Loveless, but it’s a bizarre choice for a single. Then again, that’s how crazy-like-a-fox Alan McGee operated Creation back in those halcyon daze. The man did not subscribe to conventional wisdom—at all. “To Here Knows When” blooms like a flower on Pluto, or plumes like an exploded New Age composition whose hazy amorphousness is shot through with Bilinda Butcher’s luscious coos. This could be the theme song for every baby in every womb—all atremble with wonder, but burbling with an undercurrent of foreboding at the horrors to come once the umbilical’s snipped. “Swallow” may be the most beatific song in MBV’s blessed canon—which is saying a helluva lot. But seriously… I dare you to find a more opiated, erotic piece of exotica than this Butcher-sung tune. MBV mastermind Kevin Shields really hit on a sensual, peaceful groove here. I could use at least 30 minutes of it, to be honest.

By contrast, “Honey Power” is about as straight-ahead of an uptempo rocker as MBV wrote in this era. Still, it contains plenty of those urgent, tremolo-laden guitar torrents, as Shields and Butcher unleash lavender flames of quasi-kazoo-like timbres. As with the preceding two tracks, “Honey Power” features a coda that adds a wonderfully disorienting aura to the record. (If I were more of a contrarian, I’d say these concluding tangents were the best parts of Tremolo.) The closing “Moon Song” swirls in an almost old-fashioned mode of romantic balladry, although the honeyed drones and muted bongos beneath Shields’ sincere singing nudge the song away from sentimentality.

In 1991, MBV could do no wrong. Tremolo‘s phantasmagorical whirl of astral ambient rock found them pulling way ahead of the pack… and it wasn’t even their peak release from that year. (By the way, we really could use a vinyl reissue of this EP.) -Buckley Mayfield