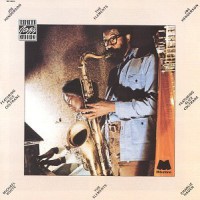 Would you look at this lineup renowned jazz saxophonist Joe Henderson assembled here… Alice Coltrane on piano, harp, harmonium, and tamboura; Charlie Haden on bass; Michael White on violin and flutes; Leon Ndugu Chancler on drums; Kenneth Nash on a wide, international array of percussion instruments. All of these badasses converged to create a Henderson’s most rewarding album of the ’70s—if not his entire career.

Divided into the four elements, as it says on the tin, the album possesses four distinct moods on each track, all of them worth their extended durations. “Fire” coasts in on a buoyant Latin shuffle and bop-wise instrumental interplay, occasionally blooming into full-throated ebullience. This is not the fire music you may have been expecting. Yes, it’s pleasant and full of Henderson’s mellifluous blowing, but it’s not the barn-burner at which the title hints. “Air” wafts into the region of Alice Coltrane’s Ptah The El Daoud, on which Henderson also played. This is elegantly turbulent jazz bolstered by the timbres of African percussion, as Henderson, Coltrane, White, and Haden engage in a gregarious conversation in which each makes fascinating assertions.

Side 2 is where things really get interesting. On “Water,” Coltrane’s tamboura purrs ominously and Henderson’s sax seductively warbles warpedly over a gently bubbling percussion foundation. “Water” is—wait for it—fucking deep. Henderson saves the best for last with “Earth,” which is quite simply one of the funkiest cuts ever, as Ndugu and Haden lock into a groove that you never want to end. If that weren’t enough, Alice’s tamboura arcs into a transcendent halo of chakra-vibrating tones while Henderson concocts what may be the most memorable and melismatic motif of his career. At another point, White gets off a mantric violin solo that sounds plucked rather than bowed, while later in the piece, Nash recites a meditation that contends “time is only now” while Henderson intones ultimate peace vibes on flute.

If you need further confirmation that “Earth” is a kozmigroov jam for the ages, note that Four Tet included it in all its 13-minute glory for his 2004 LateNightTales mix. Truth be told, “Earth” should go on every mix ever. It exemplifies a certain mystical strain in jazz while radiating an overwhelming sensuality. You can almost imagine it fitting onto Miles Davis’ On The Corner, but it’s somehow too sexy even for that libidinous masterpiece. -Buckley Mayfield