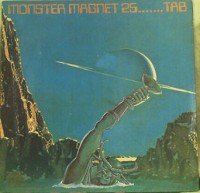 For a minute in the early ’90s, I thought Monster Magnet were gonna blow the hell up. They had a charismatic, good-looking frontman (Dave Wyndorf), gargantuan riffs, more effects pedals than J Mascis (perhaps), a surprisingly deft way with a hook, and a kickass slogan: “It’s a Satanic drug thing… you wouldn’t understand.” But alas, Monster Magnet never took off like they should have, instead existing for more than a quarter century as a cult psych-rock band with heavy-metal inclinations—or is that a cult heavy-metal band with psych-rock inclinations? Don’t ask me, I’m in terrible sleep debt.

Anyway, Monster Magnet’s early singles and albums like Spine of God placed them in the vanguard of the American hard-rock ghetto. When 25…Tab came out soon after Spine, my circle of friends and I lost our fucking minds… and found nirvana. (Yeah, dude, we loved thi more than Nevermind, which came out the same year.) Mostly we loved the 32-minute “Tab…” a track too mammoth for the overused word “epic.” (A buddy of mine used to listen to this song obsessively while training for a marathon; it helped!) Wyndorf babbles lysergic nothings over a riff that make “In-A-Gadda-Da-Vida”’s sound like bubblegum pop. A panoply of guitar FX fibrillates like Hawkwind jamming in an insane asylum. A new high in heavy is achieved. Most grunge sounded trés twee compared to this.

The remaining two cuts here can’t help sounding a bit underwhelming after that mantra of destructive distortion. Still, “25/Longhair” is 12.5 minutes of outrageously revved-up, Deep Purple-y rampaging (think Machine Head x In Rock), with Wyndorf croaking like Steppenwolf’s John Kay through a Stephen Hawking voice generator. “Lord 13” downshifts the album into a hard-strumming conclusion, sounding like an Agitation Free or Embryo outtake laced with rueful beauty. Monster Magnet’s gentle comedown is still more fried than most rock bands’ wildest freakouts. With some poignancy, Wyndorf sings “What do I want from me?/A clock that goes 13/A deal with the pyramids/A way to know everything.”