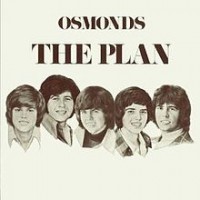 Write off the Osmonds at your own peril. Sure, they’re easy laughingstocks: a family of squeaky-clean Mormons trying to come off as the Caucasian Jackson 5. But these clean-cut brothers had oodles of talent and big budgets boosting their blatantly commercial vision. Throughout the ’70s, they excelled at bubblegum pop, glam, soul, funk, disco, and even a glossy strain of metal on “Crazy Horses.” Stop snickering and spring for a few of their early-’70s LPs for proof… while they’re still cheap.

Where were we? Oh, yes, The Plan. It’s universally considered the Osmonds’ most ambitious work: a concept album about the Mormon faith (Google it), written by Merrill and Wayne, and produced by Alan. Now, nobody’s more leery of overblown songs devoted to imaginary deities than your reviewer. But I’m gonna try to set aside my agnostic biases and judge this opus on a purely sonic basis. And on that level, The Plan mostly succeeds.

(Will it convert you into a Mormon? I sure hope not, but you’ve been known to do stupider things. Oh yes you have.)

Let’s get the stinkers out of the way first. “Before The Beginning” is a Vegas-y, oh-so-earnest ballad with that most annoying of balladic tropes: a crying baby. The tender as fuck orchestral ballad “Darlin’” liberally ladles on the syrup while “Are You Up There?” comes off as bombastic as anything on Aphrodite’s Child’s 666, but it’s not nearly as sublime. Slightly better is “Let Me In,” a dashing slice of ELO-ish orchestral pop that the Avalanches sampled on Since I Left You. It’s very accomplished schmaltz that reached #36 on the Billboard chart.

A couple of tunes reveal that Osmonds can do heavy rock better than most Mormons you may know. On “Traffic In My Mind,” they take a quasi-freaky stab at Deep Purple or Grand Funk Railroad gnarliness. “The Last Days” finds the Osmonds trying to sound ominous but not really convincing you that they can summon aural Armageddon. Still, it’s a valiant attempt, and the main riff would make Iron Butterfly nod in respect.

The two best cuts—“Mirror, Mirror” and “One Way Ticket To Anywhere”—are very good, indeed. The former’s an oddly metered romp animated by jittery skeins of harmonica and jaw harp while the latter’s as super-charged as Sweet’s “The Ballroom Blitz” and the Beatles’ “Back In The U.S.S.R.” “One Way Ticket” soars and dazzles like a motherfucker, bolstered by funky drumming, manic cowbell thunking, and a wicked fuzz-guitar solo.

The chart-dwelling “Goin’ Home” closes The Plan with a bellbottomed stomp augmented by alpha-male horn charts; this is climaximum rock and roll that is perhaps the Church Of The Latter-day Saints version of the Rolling Stones’ “Rocks Off.” Talk about ending an album on a god-damn high… Still, my agnosticism remains steadfast. -Buckley Mayfield