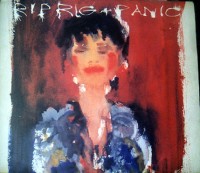 Rip Rig + Panic should be way better known than they are. A British ensemble of wild eccentrics fronted by Don Cherry’s stepdaughter, Neneh Cherry, Rip Rig + Panic named themselves after a Rahsaan Roland Kirk album. And in their own idiosyncratic manner, they carved out as bold an artistic manifesto as the legendary blind jazzman did.

Throughout the first half of the ’80s, RR+P—whose members also played with the Pop Group, New Age Steppers, Slits, African Head Charge, and PiL—overturned the conventions of funk, soul, jazz while fusing them in unconventional ways. Although they released three sporadically brilliant full-lengths, RR+P really flourished on their EPs and singles. Case in point is this crazy 12-inch from the group’s early days. I remember when “Bob Hope Takes Risks” came out, the British weekly music mags lost their shit to it. Then when I copped it, I proceeded to do the same. It was a rare example of extravagant hype being lived up to.

The seven-minute A-side—a paean to some sort of phantasmagorical goddess—gets all your senses tingling from the get-go, with Gareth Sanger scatting and Cherry singing, “She’s got that stuff in her eyes, she’s got it, she’s got it/It’s something you never can buy, she’s got it, she’s got it!” as Sean Oliver’s tunneling bass line and Sanger’s strident string and horn arrangements give the song a strange levitation. It’s a jazz-funk juggernaut with vertiginous dynamics, animated by suspenseful violin/viola/cello motifs that wouldn’t sound out of place in Hitchcock’s Psycho. Mark Springer’s mad, quicksilver piano runs and marauding trombone and tenor saxophone create a brassy forcefield that makes you want to overthrow corrupt governments (sorry for the redundancy). It’s a scandal that this track isn’t played at every ’80s DJ night in the world. Hell, maybe heads still ain’t ready for this sort of baffling club-music surrealism.

The B-side can’t help sounding a bit anticlimactic after the ultimate show-stopper, “Bob Hope Takes Risks.” But “Hey Mr. E! A Gran Grin With A Snake Of Smile” ain’t no slouch, either. A much more overtly jazz-oriented piece, “Hey Mr. E!” recalls ethno-jazz trumpeter Don Cherry (who occasionally sat in with RR+P) at his most manic. Bruce Smith’s drums and percussion work shine, as he generates a roiling and tumbling foundation over which the rest of the band stain the stereo field with magmatic Pharoah Sanders-esque sax, snaky, Charlie Haden-like bass, and Sanger’s insane-asylum babble. It’s like a more abstracted take on Pigbag’s “Getting Up,” and therefore very worthwhile. But, as I said, “Bob Hope Takes Risks”—snide title and all—is where the real thrills and spills happen.

(It would be nice if some adventurous label reissued Rip Rig + Panic’s entire catalog on wax. But I’ve been saying that for like two decades, to no avail.) -Buckley Mayfield