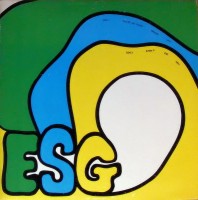 The impact this EP had when I first heard it in 1981 was immediate and ecstatic. Made in the Bronx by the four Scroggins sisters and a conga-playing friend named Tito Libran, ESG’s eponymous debut release shot vital energy and joy into the veins of anyone with a mind attuned to fundamental, funky groove science. Music this elemental, earthy, and efficacious should be sold in health-food stores. ESG is a family affair, and it is so righteous.

The music of ESG (stands for Emerald Sapphire & Gold) succeeds through its ruthlessly stripped-down attack that privileges drums, congas, bass and vocals that seduce and sass you with equal measure. The six songs on ESG offer the purest distillation of this influential band’s sound, in which nearly every element strives to get you moving as sexily as possible. You’ve surely heard “UFO” sampled in hundreds of hip-hop and dance-pop tracks, but the funny thing about that is it’s ESG’s least conventionally danceable cut. But producers honed in on that eerie, distorted guitar whorl, surely because it’s redolent of pop culture’s idea of an alien presence. Unsurprisingly, it became the default trope for “woo woo” creepiness in clubland throughout the ’80s.

If you wanna instantly draw in a listener, you could do much worse than “You’re No Good,” a song about conflicted lust whose hip-swiveling beats seem to be tumbling down the stairs, louchely and elegantly. “Moody” conjures hyper, dubbed-out rhythmic legerdemain, with speedy congas contrasting with the trap kit’s stoic funk foundation. Singer Renee Scroggins is in peak coquettish form here. With “UFO,” ESG again forge another downward-sloping rhythm that slaloms with Renee’s guitar feedback sculpted into Bernard Herrmann’s Psycho shock-tactic strings. Deborah Scroggins’ bass line is superbly economical in its lugubrious descent, while all around it coheres into an atmosphere of piercing menace. (Note: Factory Records’ studio savant Martin Hannett produced this enchanting trio of songs, as he did Basement 5’s In Dub, which I reviewed last week—coincidence!)

ESG went on to cut some other great records, of course, but they came right out of the gate fully formed as one of history’s most efficient and fun funk units on this initial effort. ESG is proving to be one of life’s simple, eternal pleasures. -Buckley Mayfield