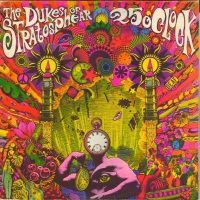 When 25 O’Clock came out 32 years ago, it sounded at once like a prank and a homage. That it was released on April 1 convinced many that it was indeed more the former. The cover screamed love for Cream’s Disraeli Gears, the pseudonyms hinted at British whimsy, and the music approximated the various permutations of late-’60s psych-rock with a maniacal fan’s ear for detail. When it emerged that the Dukes Of Stratosphear were actually the popular new-wave group XTC and not a forgotten gaggle of acid-gobblers from two decades earlier, some listeners kind of soured on the premise, but many others said fuck it, who cares—this record rules, no matter if it hadn’t been languishing in some vault, unheard and accruing legendary status. Count me in the latter bunch.

A concise, perfectly formed six-song EP, 25 O’Clock begins with the title track, a serpentine stormer in the vein of Electric Prunes’ “I Had Too Much To Dream Last Night,” with an organ sound akin to Chick Corea’s on “Imp’s Welcome,” of all things. It’s an obsessive love song about a bond that transcends the ordinary parameters of time, and it’s a sure sign that the Dukes know their ’60s psychedelia over under sideways down. “Bike Ride To The Moon” effervesces in the same sonic playground in which Syd Barrett frolicked, capturing the late Pink Floyd leader’s knack for loony melodies and beautifully chaotic song structure. You can totally imagine this song on The Piper At The Gates Of Dawn.

“My Love Explodes” is simply one of the most exciting songs ever, an adrenalized agglomeration of nearly every trick in the psych-rock playbook. A bonkers rave-up that could singe the hair off the Yardbirds and Count Five, it evokes an LSD trip that’s simultaneously exhilarating and harrowing. Perhaps too predictably, it ends with a “7 And & Is”-like explosion and a recording of a nerd vehemently dissing the song. Talk about a buzzkill… But all returns to bliss with “What In The World??…” an oneiric inversion of’ “Rain” and “Tomorrow Never Knows”—two of the Beatles’ greatest compositions.

“Your Gold Dress” offers more Pink Floyd worship; it’s a minor-key, low-slung snake-charmer of a tune bolstered by liberal usage of vocal FX, backward phased guitars, sitar-ized guitar, and harpsichord. The EP’s peak may be “The Mole From The Ministry,” a blatant revamp of “Strawberry Fields Forever,” but “Mole”—replete with a Mellotron motif that would make the Moody Blues weep and a false, backward-sucking false ending that summons a phantom “I buried Paul” in your mind’s ear—makes the Beatles’ paragon of creepy psych comedown seem like a bit of teatime frippery.

Yes, 25 O’Clock is pastiche, but it’s the pinnacle of pastiche. It’s my favorite work by XTC, and I’m still not sick of it a hundred listens later. -Buckley Mayfield