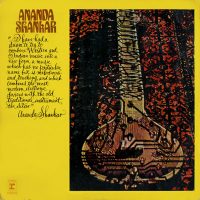 East-West musical fusions proliferated like mad in the ’60s and ’70s—hell, they’re still happening, if not as frequently as they used to when society as a whole was more open-minded and psychedelically inclined. Most of these efforts stem from Western musicians dabbling with Eastern forms. Indian sitarist/composer Ananda Shankar’s self-titled 1970 debut LP is the rare record where an Eastern musician tries his fleet-fingered hands at rock, and the result is fabulous.

Ananda (who was Ravi Shankar’s nephew) had the audacity to tackle two sacred cows of classic rock—the Rolling Stones and the Doors—and the skills to breathe vital new life into “Jumpin’ Jack Flash” and “Light My Fire.” The former is one of the greatest Rolling Stones covers ever. If you’re going to make a concession to rock conventions, this is the way to do it. The rhythm’s funked up to a humid degree, while Shankar leaves out most of the lyrics, with only the chorus chanted by women vocalists. Shankar’s sitar takes the lead and he really psychedelicizes and embellishes the main riff, while Paul Lewinson’s Moog accents contrast wonderfully with the sitar’s sanctified twangs. Even Mick and Keef would have to concur that this version is a gas gas gas. Meanwhile, Shankar’s “Light My Fire”—which is already very well-suited to Indian scales—fits the Doors’ original like a perfectly tailored Nehru jacket.

Shankar’s original compositions peak with “Metamorphosis,” a gorgeous, gradually unfolding, cinematic song that should have classed up a movie in the early ’70s in a montage where a couple grow deeper in love and/or attain a sexual climax. (Whoa, that frenzied ending!) “Sagar (The Ocean)”—the only track here played in the Indian classical style—consists of 13 minutes of glinting sitar spangles and brooding Moog fugues. It’s a totally hypnotic tone poem in Sanskrit and analog circuitry and a soundtrack for your most profound and chillest hallucinogen experience. “Dance Indra” is what you might hear in the hippest Indian restaurant in the Western world: a composition of ceremonial grandeur celebrating humanity’s highest emotions and most harmonious sentiments. The album closes with “Raghupati,” an exultant piece powered by celebratory Hindi chants, allegedly from 10 of Shankar’s friends, in praise of the deity Rama. It induces a glorious sense of well-being, and as a bonus, it’s powered by a funky rhythm.

Ananda Shankar is the rare East-West fusion record that works in the discotheque and in the temple. Bow down to its hedonistic holiness. -Buckley Mayfield