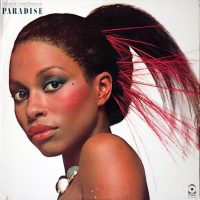 Paradise is an odd entry in the Sonny and Linda Sharrock discography. First, they made the leap to a major label—which, if you know the husband/wife duo’s earlier, highly uncommercial Black Woman and Monkey-Pockie-Boo LPs, made little sense. Second, ATCO tapped Turkish avant-garde electronic-music composer Ilhan Mimaroglu to produce Paradise. Huh?! Hahaha. Did the execs think ol’ Ilhan had the golden radio ears? Uh, no. Third, look how glammed-up Linda looks on the cover. ATCO sure seemed determined to get the Sharrocks’ unruly music into many consumers’ ears. Spoiler alert: Paradise bombed.

While the record company’s bigwigs may have been disappointed by this album, you, the smart listener at home, should find at least half of Paradise to be freakin’ amazing. Whereas Linda’s Yoko Ono-esque wails and shrieks and Sonny’s free-jazz skronk and busted blues and gospel excursions dominated the aforementioned two records, Paradise represents the couple’s attempt to temper their wildness into something resembling songs that humans might want to listen to without fear of breaking their leases. Hell, it seems like the Sharrocks were even trying to make folks dance to their music.

“Apollo” starts as if S&L are going to sex you up properly with some soulful balladry. Their hardcore fans must’ve been furiously scratching their heads. But 100 seconds in, the Sharrocks get freaky in a whole different way, accelerating into a bizarre fusion of early Mahavishnu Orchestra and Billy Preston circa “Outa-Space.” Kenny Armstrong goes nuts on clavinet and Sonny sounds like he’s auditioning for a No Wave band—a couple years before No Wave was a thing. It’s one of the craziest guitar solos I’ve ever heard—and I’ve heard a lot. And then for “Apollo”’s last minute, they return to the original balladic blissfulness… because they’re perverse like that.

With its Mellotron, Linda’s plaintive chants, and Sonny’s spidery guitar filigree, “End Of The Rainbow” carries an air of earthy Alice Coltrane mysticism. “1953 Blue Boogie Children” finds Sonny getting off some unbelievably strange guitar tones and outlandish solos within a fairly conventional blues framework. He really shatters the form, while Linda enters near the end for some distressed vocal ecstatics. The celestial gospel reverie of “Peaceful” almost hints at Spiritualized à la “Shine A Light.” Album-closer “Gary’s Step” harks back to the Sharrocks’ 1970 records with its ebbing and flowing amorphousness, Linda’s acrobatic, Annette Peacock-like “ah”s and “la”s, and Sonny’s furious stroking of the strings at the headstock, creating high tension amid the song’s ostensible placidity.

Last but most, “Miss Doris” is a funk-rock scorcher, but with frenetic Moog embellishments last heard on Edgar Winter Group’s “Frankenstein.” Linda scats up a feral storm as the band bustles with the bravado of Funkadelic circa the crazily cataclysmic “Wars Of Armageddon,” cowbell and all. I occasionally spin this in DJ sets, and its 9 eventful minutes of splintering guitar heroics and undulating rhythms—including Dave Artis’ On The Corner-evoking bass line—sure get everyone’s attention.

Paradise may strike some Sharrock aficionados as too slick for their avant-skronk tastes, but listen closely and you’ll hear Sonny and Linda inserting tons of subversive actions into the mix—and on a major label’s dime. I don’t care if it gets me kicked out of the Actuel Records Fanboy Club, but Paradise is my favorite Sharrock album… by a plectrum. -Buckley Mayfield