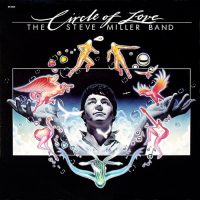 You’ve probably seen this album 593 times while rifling through bargain bins without thinking much about it; no way it could be as wonderful as Fly Like An Eagle, amirite? Well, I certainly zipped right by it for many years. Until one day I didn’t. I finally let my curiosity about the sidelong track on side two get the best of me and… sometimes your instincts lead to positive outcomes. Such was the case with me investigating the 18-plus-minute “Macho City.”

But let’s not get too ahead of ourselves here. First we have to dispense with side one, which is pretty disposable. “Heart Like A Wheel” is happy-go-lucky rock harking back to ’50s innocence and sincerity. This sort of regression just sounds depressing to me. Miller gives the traditional song “Get On Home” the synth-sheen treatment that commonly afflicted early ’80s records. It’s an inconsequential bauble. So is “Baby Wanna Dance,” a doo-wop-inflected, early-Beach Boys ditty that suffers from the same insipid cuteness as “Heart Like A Wheel.” “Circle Of Love” is an innocuous love song that bears a slight resemblance to Rumours-era Fleetwood Mac (non-Lindsey division). So far, so uninspired.

But all of that tedium is worth it for “Macho City,” which begins as if it were “Fly Like An Eagle” on amphetamines, working up a frothy head of disco steam. Miller’s stilted spoken-word “rap” disparaging various forms of military machismo lands awkwardly, but that eventually subsides and the band locks into a jam that’s as far out as anything the hugely popular guitarist/vocalist has ever done.

While Miller limits his contributions to some sparse e-bow sighs and a few psychedelic, flanged riffs, bassist Gerald Johnson and keyboardist Byron Allred are the track’s real standouts. The former fingers out a staunch, Holger Czukay-esque funk foundation with drummer Gary Mallaber (including an homage to the famous riff from David Byrne-Brian Eno’s “Regiment”) while the latter produces a series of whooshes and drones that wouldn’t sound out of place on your favorite kosmische krautrock record from the ’70s.

“Macho City” closes with a few minutes of rain and thunder sounds. I bet Capitol execs were not happy with that, but this decision does make it easy for DJs to segue out of and offers a respite for listeners to wonder what the hell they just heard: classic-rock fixture Steve Miller creating an epic club classic that went on to be spun by underground disc jockeys such as David Mancuso. Nobody saw that coming. -Buckley Mayfield