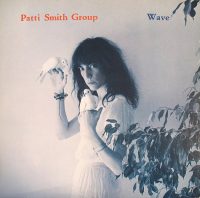 Basically, you need Wave for its first three songs. Talk about a front-loaded LP… “Frederick”—which retreads Smith’s biggest hit, the Bruce Springsteen collab “Because The Night”—is a tribute to Patti’s soon-to-be husband, Mr. Sonic. It’s a sweepingly romantic rocker that sounds nothing like her beau’s band. Co-written with guitarist Ivan Kral, “Dancing Barefoot” is a low-slung rock mantra in which Smith sings as if she’s in a trance. The easy-going, undulant ramble foreshadows R.E.M. and certain Feelies tracks. No wonder the latter covered it, as did Simple Minds, the Celibate Rifles, Pearl Jam, U2, and others.

Wave crests on Roger McGuinn/Chris Hillman’s “So You Want To Be (A Rock ‘N’ Roll Star).” PSG’s is my favorite version of this much-covered song—I like it even better than the Byrds’ original. Smith and company execute an irrepressible interpretation whose main riff is a masterpiece of minimalism that hints at the transcendental, tidal rock of late-’90s Boredoms. (Highest compliment!) Patti surely could relate to McGuinn and Hillman’s cautionary tale and their lyrics’ overarching cynicism—even as she’s singing the hell out of the song in a display of sheer bravado that’s very rock-star-like. The guitar solo is also striving for the sort of glory against which the words are warning. Irony!

Unfortunately, the stretch from “Hymn” through “Broken Flag” is hard going. “Revenge” is lumbering, slow-blooming, dramatic rock about a dying relationship, as Smith sings, “All the gold and silver couldn’t measure up my love for you/It’s so immaterial.” “Citizen Ship” and “Seven Ways Of Going” are hugely bombastic tunes that make Nick Cave And The Bad Seeds seem like shrinking violets. The former’s a Sturm und Drang political song while the latter is so over the top, it qualifies as PSG’s “L.A. Blues.” “Broken Flag” is a swaying, lighters-aloft anthem that sounds like music for a political rally—but ironically rendered.

Yeah, Wave is kind of a disappointment, because we have such high expectations from Patti Smith and her crack band. But that opening triumvirate of classics is sufficient to make it worth your while. -Buckley Mayfield