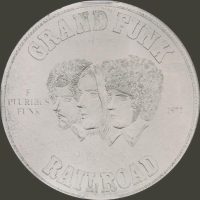 E Pluribus Funk is probably the greatest album ever to be packaged to look like a silver coin. Admittedly, there’s not a lot of competition for that honor, but still… respect is due. Speaking of which, Flint, Michigan’s finest never have received much of that stuff from critics, but Grand Funk Railroad’s extravagant commercial success (multi-platinum records, hit singles, selling out Shea Stadium in 72 hours, etc.) shouldn’t detract from you enjoying their genuine strengths.

Produced by Terry Knight, E Pluribus Funk is an unabashed par-tay record. Being as it’s made by dudes from the central part of a centrally located Rust Belt state, the album pummels with a ferocity that comes from folks who have to endure six months of shitty weather per year. (As a native Detroiter, I speak from bitter experience.) Whatever was fueling drummer/vocalist Don Brewer, guitarist/keyboardist/vocalist Mark Farner, and bassist Mel Schacher in 1971, it was pretty potent.

Opening tracks don’t get much better than “Footstompin’ Music.” This uptempo boogie bomb does what it says on the tin, pretty much running head-to-head with the Bohannon funk burner of the same title. Put this on at a party and watch rivalry turn into revelry. “People, Let’s Stop The War” is tough-as-hell funk-rock that wouldn’t sound out of place on the crucial Chains And Black Exhaust compilation of black psychedelia. The sentiment—see the title—may be simple-minded, but it was righteously on point during the Vietnam conflict. “Upsetter” is burly, uproarious party rock that’s very clever with maracas (no, it doesn’t sound like Eno’s “Baby’s On Fire”), while “I Come Tumblin’” peddles rugged, churning rock that’ll whip you into a sweaty frenzy, if you’re open to its rude, thrusting nature.

That’s a hell of a side 1, so side 2 can’t help seeming a bit lacking in comparison. The best thing I can say about the middling hard rock of “Save The Land” is that it must’ve burned a lot of calories during the recording of it. For better for worse, the bombastic hard rock of “No Lies” sounds like a blueprint for Guns N’ Roses circa Appetite For Destruction. The LP ends with “Loneliness,” a pensive, strings-augmented ballad that sometimes tilts into bloated melodrama as it strives for a momentous climax. Nevertheless, it’s a bold tangent in this context and is pretty ambitious for GFR.

Given its fantastic, circular packaging and dynamite first side, E Pluribus Funk merits space on your shelf. File it next to Small Faces’ Ogdens’ Nut Gone Flake. -Buckley Mayfield