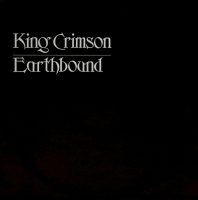 I’m generally not a huge fan of live albums, but Earthbound definitely merits as much undivided attention as any King Crimson LP from their peak era (1969-1975). Recorded at various dates on their 1972 US tour, the five tracks on Earthbound represent some of the pioneering British prog-rock group’s funkiest and farthest-out moments—in addition to tracks not found on any other studio releases. It’s kind of an odd mishmash, but it never sounds less than vital and thrilling—no matter how hard the anal-retentive audiophiles on Prog Archives bitch about the original release’s notoriously poor sound quality. (Earthbound got upgraded with several remasters/reissues in the 21st century. I would recommend getting an HDCD of it, just this once.)

You can’t beat the start of Earthbound: a scorched-earth rendition of prog’s Big Bang, “21st Century Schizoid Man” (you know, the song Kanye West sampled for “Power”). This 11-plus-minute bad boy is unbelievably heavy, and electrocuted by vocals so distorted they sound as if they’re being run through an air-conditioner fan. King Crimson whip this warhorse into the fiercest shape it’s ever been in. Bassist Boz Burrell is so much more of a beast on the mic than was Greg Lake on In The Court Of The Crimson King, and the notorious instrumental breakdown is longer and more brutal and chaotic than that in the 7-minute-plus original. Saxophonist Mel Collins blows articulate fireballs while Fripp shreds at peak fury. They take what was already one of rock’s most spasmodically dynamic and explosive numbers and nuclear bomb it further. CATHARSIS, AHOY!

“Peoria,” by contrast, is funky, straightforward rock with a slurring, alpha-male sax solo. It’s the closest King Crimson ever have come to Grand Funk Railroad or Rare Earth. (You may think that’s a diss, but you’d be wrong.) The instrumental freak-rock of controlled madness that is “The Sailor’s Tale” diverges from the version on Island in that it’s rougher and vocal-free. “Earthbound” flaunts an incredibly funky 40-second open break by Ian Wallace at its beginning that’s nearly as heavy as Bev Bevan’s beats in the Move’s “Feel Too Good.” Burrell grunts like a boar in heat, as if he’s auditioning for Bad Company, but the groove is so lubricious, one can (almost) forgive him. The album closes with “Groon,” a loose quarter-hour jam that encompasses contemplative spiritual jazz, rugged jazz-rock, a thuggish, rumbling drum solo, and Pete Sinfield filtering Wallace’s drums through a VC3S to cause zonked-to-hell electronic tumult that foreshadows mid-’90s IDM. Holy shit, what a bizarre climax!

Plenty of Crimson fans malign Earthbound, but I recommend that you keep an open mind about this rough-round-the-edges anomaly, as it contains some dome-cracking revelations. -Buckley Mayfield