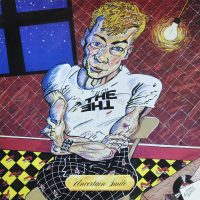 As someone who’s only listened to The The up through 1986’s Infected, I can’t claim to be an authority on leader Matt Johnson’s musical career. However, I can confidently state that I am an expert on The The’s 1982 EP, Uncertain Smile. I bought it soon after it came out on British import during the grim Reagan/Thatcher era and proceeded to listen to its three sui generis songs obsessively, while putting the title track on many a mixtape. Uncertain Smile may not be the most popular or revered release in Johnson’s catalog, but I maintain that it deserves repeat plays and a lofty place in your musical pantheon.

“Uncertain Smile” itself begins with some of the most urgent, warped marimba you’ve ever heard, before suavely shifting into a midtempo dance-rock groove augmented by a plangent guitar and mournful flute motifs of utmost poignancy. The flute solo is mellifluously melancholy enough to earn a spot on a Moody Blues LP. Johnson sings like an introverted, less narcissistic Morrissey here, relating a fraught internal emo-drama with intimate equanimity. You will feel Matt’s pain.

The song’s long instrumental bridge coasts into mysterioso jazz territory, with brooding sax and sly bass laying a foundation for another madly undulating marimba solo. As the song progresses, more elements enter (sumptuous synth swells, heavily FX’d harmonica, an intriguing sound I can’t pinpoint), adding to the sensation that this is a once-in-a-lifetime epic that transcends its early-’80s British milieu. Make no mistake: “Uncertain Smile” is The The’s peak and one of the greatest songs ever. The truncated version on the 1983 LP Soul Mining pales beside this one.

By contrast, “Three Orange Kisses From Kazan” is a weirdly ominous yet enigmatically beautiful piece of art pop, like some amalgam of Tuxedomoon, early Clock DVA, and Tin Drum-era Japan. “Why do people never say what they mean? / Why do people just repeat what they read?” Johnson gripes, and that sentiment still resonates 37 years later. Another example of Johnson’s unique way with songcraft and vocal modulation, “Three Orange Kisses” presents a perfect balance between melodiousness and cacophony. It’s some of the most gorgeous chaos that appeared on record in the ’80s. “Waitin’ For The Upturn” can’t help sounding somewhat anticlimactic after the preceeding two classics, but it’s still a gem of low-key, chilling balladry, like a master class of muted Sturm und Drang. The production on Uncertain Smile by Mike Thorne (Wire, John Cale, Laurie Anderson, Soft Cell) is spacious and dynamic, abetting Johnson’s idiosyncratic ideas about timbre and atmosphere. -Buckley Mayfield