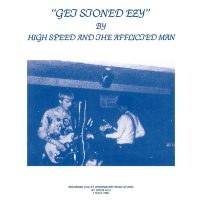 A self-described “hippie punk,” British guitarist/vocalist Steve Hall cut this cult classic during the waning days of post-punk’s zenith. It must’ve sounded extremely out of time in that milieu of severely angular and often funky rock that frequently agitated for leftist/progressive political causes. Here was an unabashed, heavy-as-fuck psych-rock beast built for reckless—if not wreckless—speed that practically made listeners grow mutton chops while it was playing. Its three long songs hit you with Hell’s Angels-on-a-tequila-bender brutality.

Get Stoned Ezy sounded nothing like, say, post-punk touchstones such as Joy Division, the Pop Group, or Raincoats. Unsurprisingly, High Speed And The Afflicted Man pretty much vanished without much fanfare… until the reissues started materializing in the 2010s. (Thanks, Guerssen!)

The six-minute title track sets the tone; it’s dominated by primitive, ram-rodding riff, fuzzed and metallicized and run right into the ground, till it hits the earth’s core. Hall boozily bellows about getting blunted with not much difficulty, his guitar sounding like Ron Asheton trying to blend Jimi Hendrix and Tony Iommi at their brashest.

“Zip Ead” offers 14 minutes of slightly slower Neanderthal rock in which Hall’s guitar bleeds way outside the lines of decorum, like early Blue Cheer jamming with Japanese speed freaks High Rise. It’s another exercise in repetition as redemption, the road of excess leading to the chalice of (six-string) jizzdom [sic].

The 12-minute “Sun Sun” is a burly, fuzzed-out mantra that pummels its way into the delirious jam-band zone where Hapshash And The Coloured Coat, Ya Ho Wa 13, and Magic Hour dwell. Let us take a moment to praise bassist Paul Mason and drummer Billy Frater, who get the motherfuckin’ job done with minimal fuss. They’re the rock-solid foundation beneath Hall’s flagrant guitar wankery. And no, that is not a diss in my book, if the person musically masturbating has talent and cunning. Hall has just enough of those things to make his caveman rock punch above its weight. -Buckley Mayfield