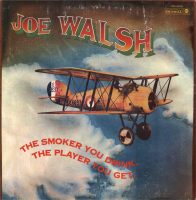 After he left James Gang (great band!) and before he joined the Eagles (hugely popular band who are not my bag, though I like a few of their songs!), Joe Walsh cut a few albums with Barnstorm, including The Smoker You Drink, The Player You Get, perhaps the guitarist/vocalist/keyboardist’s peak with that band—and the title that most resembles a line from a Firesign Theater routine.

The LP is distinguished by its opening track, “Rocky Mountain Way,” which reached #23 on the US singles chart in 1973. One of the most iconic guitar riffs of the ’70s—nay, of all time—kicks off this spaced-out, blues-rockin’ party tune. Yes, you’ve heard it 9 billion times, but its widescreen grandeur, crystalline crunch, and wonky, wah-wah-heavy solo refuse to pall, even after all that exposure. It’s a tough act to follow, but the rest of The Smoker… bears some low-key treasures.

“Wolf” is a spare, bleak ballad in the vein of Aerosmith’s “Season Of Wither” and some of Robin Trower’s ’70s output, generating some chilly melancholy. Written by keyboardist Rocke Grace, “Midnight Moodies” surprises with its elegant jazz-rock vibe, bolstered with piano, cowbell, and flute by drummer Joe Vitale. Another shockingly pleasant tangent comes courtesy of bassist Kenny Passarelli’s Caribbean-spiced rock cut “Happy Ways,” with its sprung rhythm and killer bass line. The song really blossoms into a rousing rocker during the choruses, bursting with “la la la”s and “na na na”s. It’s the feel-good non-hit of the record.

The second side of The Smoker… is more subdued and less interesting than the first side, but it has its moments. “Meadows” is tender, melodious rock with beefy-riffed power surges, while “Days Go By” (another Vitale composition) brings the sort of flute-augmented baroque rock that, oddly enough, sounds more like the Left Banke than anything else.

The Smoker You Drink, The Player You Get is the sort of wildly popular major-label album that litters nearly every bargain bin in the country, but don’t underestimate it. It reveals Walsh and company’s instrumental depth and aptitude for emotionally resonant songwriting beyond of the radio staples for which they were known and loved by classic-rock radio programmers and the people mesmerized by them. -Buckley Mayfield