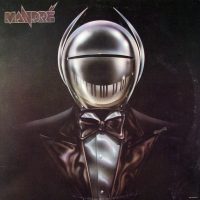 Michael Andre Lewis, formerly of soul band Maxayn, reinvented himself in the mid ’70s as Mandré, a helmeted and masked synthesizer savant (Roland TB-808, among others) to whom Daft Punk paid homage (or “ripped off,” if we’re being honest) with their look and, to a degree, sound. His first album in this guise is a cult classic among smart club DJs. Bolstered by excellent musicians such as James Gadson (drums), Johnny “Guitar” Watson, and former Maxayn saxophonist Hank Redd, Mandré has become one of Motown Records’ greatest anomalies—and an influential blueprint for a lot of quality electro-funk and Detroit techno in the decades hence.

“Keep Tryin’” kicks off the album with brash, horn-ballasted space-funk made for seduction and gliding travel. Mandré’s not a very distinctive vocalist, but that’s not really an issue when the music’s this transportive… plus, he gets some women singers behind him to add luster. The LP reaches an early peak with “Solar Flight (Opus I).” A classy club classic that makes Barry White’s lush opuses sound modest, this pell-mell jam fools you into thinking you’re about 73 percent more sophisticated than you are. It’s a silver-dusted whirlwind of interstellar funk, geared to inspire roller-skaters on Neptune to move faster. Play it in a DJ set and watch the crowd go elegantly wild. (Interestingly, it briefly appeared as the theme for ABC’s Wide World Of Sports.)

Almost as great is “Third World Calling (Opus II),” whose ominous electro-funk features wonderfully squelching synth, flanged chikki-wah guitar, clavinet, and dreamily soulful vocals. Most importantly, Mandré’s trademark solarized synth vapors that make you feel as if you’re getting a spray tan in outer space. I get the sense that Prince loved the hell out of this track and tried to emulate it, but couldn’t quite master its menace. Thus ends a killer side 1.

Side 2 skews goofier and not as sublime as 1, but it definitely has its charms. Co-written by Watson, “Masked Music Man” is a snaky, slow-burning funk cut full of his eloquent ax action. Oddly, it recalls Dr. John’s voodoo-haunted classic Gris-Gris. As a show of gratitude to his label boss, Mandré interprets Berry Gordy’s “Money (That’s What I Want).” This paean to greed has been covered often, but not quite like how Mandré does it. He blows it out to an elastic, P-Funk jam that would make Bootsy Collins’ sunglasses levitate.

“Wonder What I’d Do,” aptly enough, is a languid love ballad not too different from Stevie Wonder’s ’70s work in the same vein. The LP’s shocker is “Dirty Love,” a cover of Frank Zappa’s lascivious funk-rock goof. Mandré is surprisingly well-suited for this snide lewdness. “Masked Marauder”—another Watson co-composition—flexes some broad, winking funk that ends the LP on a somewhat flat note. But what comes before is so damn good and ambitious, we can cut Mandré some slack. -Buckley Mayfield