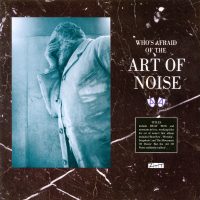 The Art Of Noise’s debut album has the air of a Dadaist art prank (orchestrated by NME journalist and propaganda minister Paul Morley) mixed with the savvy production of a prog-rock/synth-pop genius (Trevor Horn of Yes and Buggles fame), bolstered by the keyboard mastery of composer Anne Dudley and the studio ingenuity of programmer J.J. Jeczalik and engineer Gary Langan. Who’s Afraid Of The Art Of Noise? Is not great all the way through, but at its best, the album’s a brash exhibition of sonic collage and complex mood conjuring.

“A Time For Fear (Who’s Afraid)” establishes the Art Of Noise’s exceptional affinity for brutalist beat science, ominous synthetic orchestrations and atmospheres, and deeply poignant melodies. It’s this contrast of extremes that makes AON’s music so tantalizing. The group’s first single, “Beat Box (Diversion One),” gets reprised here, and it’s simply one of the most clever minimalist-maximalist dance tracks ever, powered by some of the smashingest beats ever conceived (samples of Yes’ Alan White) all the while keeping the funk factor Empire State Building high. It almost sounds like a novelty tune, but the few well-chosen elements cohere into club classic that’s more Kraftwerk’s “Numbers” on steroids than Laibach. Maybe best of all, it ends on a languorous soul-jazz piano motif that no one saw coming. This is an exemplary use of typically non-musical elements to build memorable sonic collage.

“Close (To The Edit)” stands as the more exciting twin of “Beat Box”; it slams even harder and grooves even funkier, if you can believe it. Seriously, this must have caused beat envy in producers worldwide. Inspired by the spirit of Dada and musique concrète (stuttering car ignition, power saw revving, etc.) and fueled by an unbelievably studly bass line, “Close (To The Edit)” might be Trevor Horn’s crowing achievement in the studio.

I’ll skip over the filler tracks, but note that the other good but lesser cuts include “Who’s Afraid (Of The Art Of Noise)” and “Snapshot.” The former is disorienting, industrial anti-disco, like Swiss electro pranksters Yello with stronger beats and less whimsy while the latter consists of a minute of perky, Buggles-like synth pop.

On “Moments In Love,” AON dispense with the junkyard/factory-floor tomfoolery and get down to the important business of creating a soft, shimmering electro-pop reverie that exquisitely evokes the title over its 10-minute duration. This is Dudley’s shining moment.. Deemed a classic by the Art Of Noise’s most ardent fans, this song’s a cross between 10cc’s “I’m Not In Love” and Laurie Anderson’s “O Superman.” It really is that special. -Buckley Mayfield