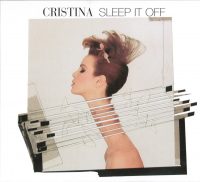 Cristina Monet-Palaci tragically passed away in early April from COVID-19 at the age of 61. She didn’t have a large discography, but what little she did release contained a high percentage of enchanting winners. Perhaps her peak was Sleep It Off, which most fully displays her flamboyant personality.

Cristina’s marriage to Michael Zilkha, co-owner of the excellent funk/No Wave label ZE Records, led to her collaborating with ZE artists August Darnell of Kid Creole & The Coconuts’, James Chance of Contortions, and Don Was of Was (Not Was). Heavy company! The latter produced Sleep It Off at his Detroit studio, and co-wrote three songs—including two of its best. Let’s talk about those first.

“What’s A Girl To Do” starts with some of the best opening lines of the ’80s: “my life is in a turmoil/my thighs are black and blue/ my sheets are stained and so is my brain/oh what’s a girl to do?” And there you have Cristina’s persona summed up from the get-go—an aristocratic hot mess who’s self-aware but making the best of a bad situation by singing over great music. “What’s A Girl To Do” barges into life with a wonderfully warped keyboard riff that telegraphs new-wave oddity and booming beats that translate to club gold. The ultra-jaunty tenor of the music contrasts with the sordid subject matter.

The album’s dramatic and rockiest peak occurs on “Don’t Mutilate My Mink,” bolstered by heroic, beefy guitar riffs by Bruce Nazarian and Barry Reynolds. Cristina’s intonations in the verses recall Johnny Rotten’s on the Sex Pistols’ “Anarchy In The UK.” “My nightdress is expensive/I don’t want to see it soiled/My heart is pretty tender/Don’t want to see it broiled/Don’t want to start my morning/With your traces on my sink/You’ll do just fine without me/Don’t mutilate my mink.” Was’ third co-written song is “Quicksand Lovers,” a femme-fatale portrait framed in a breezy, faux-tropical-electro vehicle.

Another highlight comes on “Ticket To The Tropics,” courtesy of another Detroit character: the Knack’s Doug Feiger. He and Cristina create a brash, danceable new wave with suave key changes and a synth motif worthy of the Time or Prince. Jazz magus Marcus Belgrave—another Detroiter—plays trumpet. The anomalous “Rage And Fascination” bears an ominous quasi-dub groove and stern vocal delivery; it’s the closest Cristina gets to Grace Jones.

The weakest moments on Sleep It Off are the covers. The Sonny Throckmorton composition “She Can’t Say That Anymore”—originally recorded in 1980 by country singer John Conlee—is lackluster. Kurt Weill and Bertolt Brecht’s “Ballad Of Immoral Earnings” is a duet with an annoying male singer and its quasi-reggae treatment doesn’t suit anyone well. The louche version of Van Morrison’s “Blue Money” is the best cover here. It features Chance on sax and allows Cristina to perfect her disaffected, disdainful voice while adding a sheen of sleaze to Van’s tipsy, throwback R&B.

If you want the perfect summation of Sleep It Off‘s lyrical thrust, “The Lie Of Love,” is it. In this ballad about a problematic romance, Cristina conveys regret and acceptance of hypocrisy with subdued poignancy. It’s not her best mode, but she convinces you that she’s lived through this and emerged with an alluring shred of dignity.

(Note: A fidgety cover of Prince’s classic “When You Were Mine” appears as a bonus track on the CD release.) -Buckley Mayfi