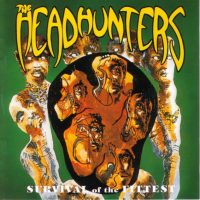 It’s baffling how certain albums of unimpeachable greatness don’t enter the canon—and even more puzzling, how they remain available for reasonable prices in used bins. One such record is Survival Of The Fittest by Herbie Hancock’s early-’70s group. Free of their leader (who co-produces the LP), the Headhunters let their funk freak flag fly ridiculously high, and the results are stunning.

You know you’re in for a scorching ride as soon opener “God Make Me Funky” starts. It boasts one of the most famous, stripped-down funky breaks ever; no wonder it’s been sampled about 300 times. When DeWayne “Blackbyrd” McKnight’s sly, warped guitar and Paul Jackson’s unstinting bass creep their way in, your libido skyrockets. After this, vocalist Bill Summers’ line, “God can give you anything want and you can do anything you want. God make me funky!” seems totally plausible. Later, Bennie Maupin’s bass clarinet solo is a wonder of economical ecstasy. Then near the end, things get hectic and chaotic, with the Pointers Sisters’ chorus of “anything you want!” culminating in a soul-jazz bacchanal. Jesus, how do you follow up such a burner?

It ain’t easy, but the Headhunters do keep the greatness flowing, if not at quite as lofty a level. With “Mugic,” they embark on an Afrocentric spiritual-jazz trip with looped flute, deeply earthy hand drums, and sonorous chants. It builds in intensity, with a monomaniacal, minimalist bass line and slamming congas igniting serious rhythmic heat. “Here And Now” offers a meditative reverie, featuring Joyce Jackson’s blissful flute sighs, but the track gradually shifts into a fleet jazz-funk charge akin to Julian Priester’s Love, Love, but in double time. Our man Maupin gets off an absolutely strafing sax solo.

Album-closer “If You’ve Got It, You’ll Get It” is a relentless avalanche of complex funk. The intro with berimbau and other exotic percussion toys builds anticipation and then WHOMP. In come the wonky bass clarinet and flanged guitar chatter, as Jackson and Clark find a pocket that’s both tight and expansive. McKnight gets off a searing, snaking guitar solo worthy of early-’70s Funkadelic (he would join Parliament-Funkadelic in 1978). “If You’ve Got It” is easily the equal of anything on Herbie Hancock’s Thrust, Man-Child, or Head Hunters. It’s a monumental conclusion to a canonical funk document. Most people just don’t realize it yet. -Buckley Mayfield