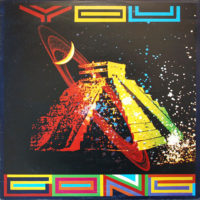 Led by guitarist/vocalist Daevid Allen and singer Gilli Smyth, Gong perfectly threaded the needle between prog rock and psychedelia during their early-/mid-’70s peak. The group’s ability to blend the whimsical, the absurd, and the cosmic culminated in their Radio Gnome Invisible Trilogy: Flying Teapot (1973), Angel’s Egg (1973), and You (1974). Composed of British and French musicians, Gong combined some of the most interesting traits of both countries’ progressive scenes, creating fetching melodies, funky and jazzy grooves, and deep space excursions. One can hear these elements and more coalesce into a stunning zenith on You.

The album flows like a brilliant DJ set on purest LSD. After two short, inconsequential pieces of goofy space-out and zany prog shenanigans, You really kicks into gear with “Magick Mother Invocation.” With its gong hit, calming “om”s, Smyth’s beatific sighs, and Tim Blake’s arcing, lysergic synth ripples, the song creates the sensation of flipping end over end in space. And how often does that happen?

This heavenly drift sets the scene for “Master Builder”; everything’s been, uh, building to this masterpiece. It’s a tom-tom-heavy astral-jazz-funk mega jam of monumental dimensions, with Allen’s Leslie-speakered vocals adding tasty frosting. Drummer Pierre Moerlen, bassist Mike Howlett, guitarist Steve Hillage, synthesist Blake, and saxophonist Didier Malherbe are all on peak form. A flaming wig-out for the ages, “Master Builder” makes you feel as if you’re on all of the drugs at once. The beneficent comedown after that mindfuck is “A Sprinkling Of Clouds,” a methodical, burbling-synth explosion. This one merely makes you feel as if you’re on most of the drugs and foreshadows chillout-room ambient music by about 16 years, before the beats and bass lines start punching out the stars and the music starts to emulate early Pink Floyd in their most aggressively extraterrestrial zones. An abrupt mood shift occurs on “Perfect Mystery,” which twirls into jaunty, Zappa-esque prog territory, as Allen and Smyth natter on about “cops at the door” and “octave doctors” and “middle eyes.” The xylophone work here is bonkers.

Side 2 goes deep, y’all. One of Gong’s most adventurous tracks, the 10-plus-minute “The Isle Of Everywhere” is totally devoid of the wackiness that occasionally mars their music. Smyth’s opiated chants and murmurs intertwine with Blake’s synths while Howlett’s and Moerlen’s suavely funky groove never stops ascending. Malherbe’s sax solo is one of the most flavorful and sophisticated in rock annals; Hillage’s guitar solo is a serpentine wonder that would make Larry Coryell and Peter Green jealous. I’m high as fuck just listening to this on my headphones on a Tuesday night in the middle of a pandemic.

“You Never Blow Your Trip Forever” is a jolly continuation of “Isle”’s interstellar trek. Allen jibber-jabbers as if he’s auditioning for Monty Python’s Flying Circus before settling into more conventional space-rock vocal mode. The band locks into a centrifugal groove that morphs into a zonked waltz, then downshifts into a “Set The Controls For The Heart Of The Sun” creep, filigreed with poignant, trilling flute. Contrary to the title, I think I did blow my trip forever.

In the end, Gong are You, and you are Gong. -Buckley Mayfield