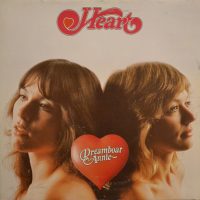 Recorded 45 years ago in Vancouver, B.C., Heart’s debut LP came out on the small Canadian label Mushroom, with which the band’s creative core (the Seattle-based Ann and Nancy Wilson) subsequently had problems regarding royalties and a tasteless full-page ad in Rolling Stone. Nevertheless, Dreamboat Annie proved that Heart were a phenomenal force right from the start—a rare outlier of women-fronted hard rock in the testosteronic sea of the classic-rock era. “Magic Man” and “Crazy On You” became ubiquitous on American radio from the mid ’70s onward, but despite the over-saturation, they still smack of freshness. If you’re tired of these stone classics, you’re probably tired of life.

Dreamboat Annie begins, of course, with “Magic Man,” whose ice-cold estrogenic rock is energized by a superfine elastic riff. Instantly, Ann Wilson proves that her voice is one of the most wondrous in rock, a vibrant, supple instrument that belts or coos with equal radiance. The acoustic- and electric-guitar parts encompass a ridiculously wide range of idioms, moods, and textures, augmented by Howard Leese’s wicked synthesizer accents. After millions of exposures over the last 44 years, “Magic Man” still enchants like a motherfucker. It’s the miracle song that keeps on giving.

“Dreamboat Annie (Fantasy Child)” provides a 70-second bridge of waves- and acoustic-guitar-enhanced shivery folk to the next hit, “Crazy On You.” This is tumultuous rock at its most dramatic, a master class in dynamics and bravura vocalizing. “My love is the evening breeze touching your skin/The gentle, sweet singing of leaves in the wind/The whisper that calls after you in the night/And kisses your ear in the early moonlight” is sweet poetry in a rock context, especially when bolstered by Roger Fisher’s Brian May-like guitar flamboyancy. As with “Magic Man,” “Crazy On You” still has the power to tingle your senses despite being as familiar as your own neuroses.

More waves accentuate “Soul Of The Sea,” a sensitivo prog-folk opus with a delicate acoustic-guitar intro leading into an intricate, Joni-esque ballad. Rob Deans and Leese’s orchestral arrangements are subtle and beautiful. More Joni vibes—plus echoes of the Byrds’ “Draft Morning”—ramble into the feathery, midtempo reverie that is “Dreamboat Annie.” “White Lightning & Wine” is the album’s most special deep cut. It’s a nastily funky, cowbell-heavy song about a debauched night that could pass as a more XX-chromosomed ZZ Top, and wow, does the rockin’ intensify near the end.

“(Love Me Like Music) I’ll Be Your Song” radically downshifts to a lighter-waving power ballad, flaunting one of Heart’s most beautiful melodies. “But if you love me like music/I’ll be your song” is some clever romantic lyricism. “Sing Child” delivers staccato funk rock in the vein of Physical Graffiti‘s grittier tracks. Oozing diabolically libidinous vibes, the song’s distinguished by Ann’s galvanizing flute solo and Fisher’s Janne Schaffer-like guitar solo. A lush ballad augmented by Leese’s orchestral arrangements, “How Deep It Goes” is a wonderfully wistful and lightly proggy tune à la the Moody Blues.

Come to Dreamboat Annie for the deathless hits, stay for the ravishing non-radio-glutting gems. -Buckley Mayfield