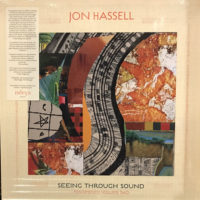 I don’t usually review new albums here, but this one by a world-class innovator, 83-year-old American trumpeter/keyboardist Jon Hassell, deserves to be heard by as many people as possible.

With Seeing Through Sound (Pentimento Volume Two), he has found new ways to elaborate on his distinctive sound. Dubbed by Hassell as Fourth World Music, it’s a hybrid of Asian and African styles tempered by minimalist compositional strategies influenced by Terry Riley and Kiranic-singing guru Pandit Pran Nath, and is distinguished by Hassell’s electronically treated horn. It’s tempting to call Seeing Through Sound (Pentimento Volume Two) and its 2018 companion Listening to Pictures (Pentimento Volume One) as late-career resurgences, but Hassell has never fallen off in over 40 years as a bandleader.

Pentimento means “a reappearance in a painting of an original drawn or painted element which was eventually painted over by the artist.” This suggests that Hassell is renovating previous innovations. While that’s partially true, long-time fans will hear new facets. Hassell suffused Listening to Pictures with eerie mists of trumpet and grounded it with thick, tumid rhythms of hazy origins, qualities evident on his luminous 1978 debut LP, Vernal Equinox. Listening to Pictures intensifies his music’s patented meditative and predatory elements while adding new textures and rhythms to his adventurous repertoire.

Seeing Through Sound continues down that path, swirling both minor and major gestures into a rich mosaic. “Fearless” sojourns through Stygian miasmas of smeared keyboard shrieks à la Miles Davis’s “Rated X,” bass smudges, slack funk beats, and eldritch plumes of trumpet. Disorientation reigns from the start. Hassell’s most famous collaborator, Brian Eno, singled out “Unknown Wish” for being “one of the most mysterious, seductive and enchanting things” Hassell has done, adding that he’d never heard anything like it. It’s a highlight, for sure, its twitchy guitar and keyboard interplay giving way to unsettling sighs recalling Goblin’s Suspiria soundtrack and the panther-like stealth of Davis’s In a Silent Way, courtesy of Peter Freeman’s electric-bass pulsations. “Delicado” also pushes into new territory, as slabs of low-end frequencies shunt ominously, forming an intrusive yet oblong rhythm more likely to get you moving toward the exits than the dance floor. The contrast between this and the icy keyboard drones and plaintive wisps of trumpet exemplify Hassell’s paradoxical inventiveness.

Drifting in on a morose, majestic drone, “Timeless” closes Seeing Through Sound on an aptly oblique note. With bass that’s more like pressure fluctuations than chord progressions, spare keyboard dabs, and scuttling crab noises, “Timeless” has too much happening for it to be deemed ambient, but its amorphousness and strange amalgam of elements make it hard to slot into any genre. The track’s yet another paragon of Hassell’s shape-shifting uniqueness. -Buckley Mayfield