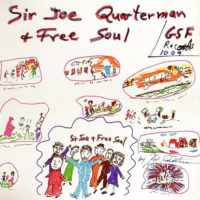 Sir Joe Quarterman & Free Soul never became household names, except in those homes where serious crate-diggers have dwelled. For one thing, that name is a goddamn mouthful. For another, their label likely lacked the marketing muscle to get the band the notice they deserved. That theirs is a common story doesn’t make it any less of a shame. SJQ and his crafty mates should’ve been much better known, but at least their debut album has been reissued frequently (both officially and not), making it not too hard to grip this start-to-finish heater.

The album starts with the group’s best-known song, “(I Got) So Much Trouble In My Mind,” a Top 30 hit in 1973. It’s highly torqued funk that would make James Brown do the splits three times and pass out. Not surprisingly, “Trouble” has been sampled over a dozen times. The tight groove, brash horn charts, and caustic, Dennis Coffey-esque guitar solo make it an irresistible force of supernature. Yes, Joe’s voice isn’t JB or Sly Stone caliber, but it more than adequately reaches the era’s demanding gritty-soul quotient. Gamers may recognize it from the soundtrack of Grand Theft Auto: San Andreas.

The greatness continues with “I Made A Promise,” whose devastatingly cool funk boasts a zig-zagging bass line worthy of the Meters’ George Porter Jr. while “The Trouble With Trouble” flexes bravura, horn-laden funk that could score a sports highlight program. Fans of J.B.s ax-slinger Jimmy Nolen’s percussive guitar attack will dig this one. The peppy, feel-good funk of “Gonna Get Me A Friend” will—yes, indeed—likely help you make friends if you play it. That’s some meta genius, even if it wasn’t intentional.

“I Feel Like This” falls very much in the vein of the Meters’ “Just Kissed My Baby,” and I’m not complaining, because this methodical, wah-wah-enhanced funk acts as a libido enhancer. Even though it’s less celebrated than “(I Got) So Much Trouble On My Mind,” “The Way They Do My Life” might be the album’s peak. Marvin Gaye-like, orchestral funk in the What’s Going On/Trouble Man vein, with wicked chikka-wakka guitar (the title derives from a line in Gaye’s “Inner City Blues [Make Me Wanna Holler”]).

To be blunt, funk albums that are great from front to back are rare. Often, these ensembles feel obligated to fill out their records with ballads, which usually drag down the mood and overall quality. When you’re up against superstars of that mode such as Stevie Wonder, Marvin Gaye, and Bill Withers, you can’t help coming up short. But Sir Joe Quarterman & Free Soul realized what their strengths were and manifested them to the max. -Buckley Mayfield