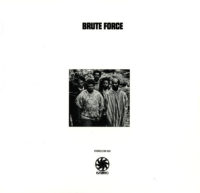 People of dubious maturity levels like to ridicule Herbie Mann for posing shirtless and exposing his man pelt on the cover of his very good bargain-bin LP Push Push. But listen up: Besides being a savvy musician with a keen ear for prevailing trends, Mr. Mann flaunted sharp A&R acumen for the Atlantic Records subsidiary Embryo in the early ’70s. (Oh, by the way, the flautist also released at least six great albums as a bandleader—which is six more than the mooks who mock him have made.)

Anyway, one case in point for Herbie’s acute scouting skills are Yellow Springs, Ohio’s finest, Brute Force, a sextet whose best-known member was Sonny Sharrock… who guested on some of Mann’s own records. Now that I have your attention, let’s discuss why you need this overlooked album by this obscure group.

Produced by the Herbster himself, Brute Force immediately busts out of the gate like a thoroughbred with its ass on fire. “Do It Right Now” is a rock-and-soul “seize the day” anthem with bandleader Richard Daniel’s vocals swathing heads in warmth in the mellow-vibrant vein of Terry Collier and Lou Bond. Sharrock’s fiery guitar filigree really launches this song skyward. The anti-conformity song “Some Kind Of Approval” bubbles somewhere between early-’70s Curtis Mayfield and Stark Reality. Daniel gets off a sublime keyboard solo and Sharrock adds zonked guitar roughage for this soul-jazz gem that’ll raise your spirits and heart rate.

“The Deacon” rambles soulfully like peak Booker T. & The MGs, with its rapid conga slaps and peppy horns making me want to watch NFL highlights from the ’70s. “Right Direction” moves in said place, and you’ll want to shoot its euphoric Latin rock into your veins—percolating congas, sweeping horns, and Daniel’s vocal flights of unstoppable positivity and all. On “Monster,” an incredibly cool bass and conga intro leads into an uptempo horn-rock jam with guitar fibrillations stroked from the instrument’s nut. It sure sounds like Sharrock’s diabolical handiwork, although he’s not credited. Still, I’d bet your stimulus check that it is indeed Sonny shredding. The playing recalls his outré work on his and wife Linda’s Paradise LP. The song builds to an intensity and wildness that bear the Sharrockian stamp, so it can’t help being a highlight.

Speaking of which, “Ye-Le-Wa” is another one. 14.5 minutes of balletic free jazz that waxes and wanes with brassy verve, this track’s not unlike Pharoah Sanders‘ output of that same era, but with more of a grounding in out-rock protocols. Daniel’s soulful vocals may not match Leon Thomas’ high-flying yodelics from “The Creator Has A Master Plan,” but they’re certainly moving, even if they simply repeat the title. The record closes with “Doubt,” a tranquil, flute-enhanced comedown after the previous blowout. Strangely, it recalls the beautifully placid “Love Sketch” by Paul Revere & The Raiders side project Friendsound. Will wonders never cease?

So, whether you’re a Sonny Sharrock completist or someone who simply enjoys soul jazz that rocks with finesse and fiery interplay, you need Brute Force. Herbie Mann would never steer you wrong, shirt or no shirt. -Buckley Mayfield