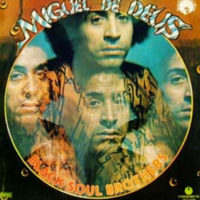 Miguel De Deus played guitar and sang for the outstanding Brazilian psych-rock groups Assim Assado and Os Brazões—the latter of whom were the fantastic Gal Costa’s backing band during the heady years of 1969 and 1970 and who should at least be as well known and regarded as Os Mutantes. Alas, De Deus—who died in 2007—and his bands still lack the high profile of Mutantes, but obrigado anyway to the Portuguese label Groovie for reissuing Black Soul Brothers and that hot Assim Assado LP in 2016 and 2017, respectively. These records provide a vivid picture of a musician with a brazen wild streak and keen instincts for the funk.

Right from jump of opening cut “Cinco Años,” MDD lets us know that the funk’s gonna be strong, bulbous, and bubbly on Black Soul Brothers. The female backing vocalist—who is maddeningly uncredited—soars in radiant counterpoint to MDD’s alpha-lech grunting. (His voice is an acquired taste that you may never embrace, but the music’s too good to reject the band outright.) You can practically smell the sexual friction in the elastic keyboard riffs twanging between the busy rhythmic hustle and bustle. “Pedaços” peddles a festive funkiness that would segue nicely in a set of tunes by War, Jimmy Castor Bunch, AWB, and Cymande (particularly, “Bra”). I don’t pass out compliments like that every day.

“Mister Funk”—which written by De Deus and Nelsão Triunfo—may be titled with heavy-handedness, but it’s a greasy, brassy groove bacchanal that will surely make your gang feel kool. The salacious summertime soul of “Flaca Louca” may test your patience due to MDD’s goofy growling, but the woman on the mic compensates for his shortcomings. At least you can’t say Miguel lacks enthusiasm…

The album peaks on “Black Soul Brother,” which was co-written by Paulo Rocco and the album’s producer, Santiago “Sam” Malnati. It’s extravagant funk that makes Sly Stone and Tina Turner seem like wallflowers. Whoever the woman singing with Sarolta Zalatnay-esque zest is, she convinces me that she needed her own album. Maybe she got it, but we’ll likely never know. The rowdy funk of “Lua Cheia” gets splattered with MDD’s gruff yelling, but the mellifluous sax parts and a bass line that coils like a gymnast working out on the uneven bars tilt the song into the W column. Bafflingly, MDD closes the record with the ballad “Fábrica De Papéis,” even though his voice isn’t in the least suited for this style. But the music’s nicely lush and seductive, the keyboard and guitar sparkling and caressing with tenderness, and the female backing vox is requisitely dulcet.

Forty-four years after its initial release, Black Soul Brothers still sounds like an explosive party platter that would make James Brown get up offa that thing, pronto. Its potency more than overcomes its creator’s grating vocal flaws. -Buckley Mayfield