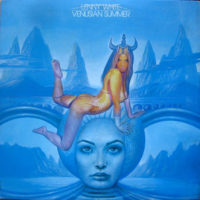 For a musician who played drums on Miles Davis’ Bitches Brew and lent rhythmic bombast and intricacy to fusion gallants Return To Forever, Lenny White is (un)fairly obscure. But his debut solo album, Venusian Summer, is a stunner, every bit as dazzling as its Larry Kresek-illustrated, sci-fi cover.

It helps that White gathered some of jazz’s most burning instrumentalists to help him realize his ambitious vision. The extroverted funk of “Chicken-Fried Steak” features Ray Gomez spraying bold guitar graffiti over White’s and bassist Doug Rauch’s greasy-as-a-KFC-grill groove. Organist Jimmy Smith’s adds another layer of spiciness. I’d never eat the titular dish, but I’ll gladly lap up this track dozens of times. Funk gets stronger and more tensile yet on “Away Go Troubles Down The Drain,” with more guitar and organ pyrotechnics, this time by Doug Rodrigues and Weldon Irvine, respectively. The song’s like that old carnival ride, Tilt-A-Whirl, but with better rhythm and dynamics. Fans of Herbie Hancock’s Man-Child will tear their bell bottoms doing the splits to this.

Dedicated to the crew of the Starship Enterprise, the 10-minute “The Venusian Summer Suite; Part I. Sirenes” is commandeered by synth master Dr. Patrick Gleeson, with help from Peter Robinson on synth, Tom Harrel on synth and flugelhorn. They all engage in awe-inspiring, stellar tone painting; this is deep, overcast ambient music in the Klaus Schulze and Peter Michael Hamel veins. On “Part II,” Harrel’s flugelhorn kicks in and things oscillate to a higher level, recalling Deodato in “Also Sprach Zarathustra” mode or Isaac Hayes stretching out with one of his orchestral-funk epics. Hubert Laws’ far-roaming flute solo and Robinson’s clavinet co-star in this space-pimpin’ track.

Side two’s dominated by a couple of lengthy showcases for that furious fusion virtuosity your punk-loving buddies warned you about. “Mating Drive” is the most RTF-like song here, a gleaming, cruising, rococo tour de force that would make prime-time Mahavishnu Orchestra bow in respect. The piece revels in excess like the most audacious prog-rockers and fusioneers, and earns their indulgence tenfold. That’s to be expected when you have studs such as Larry Young (organ), Rauch (bass), Gomez (lead guitar), Onaje Allan Gumbs (organ), and Rodrigues (rhythm guitar) at your command. LP-closer “Prince Of The Sea” begins mellowly then gradually accelerates into a fluid jazz-funk groove filigreed by Gumbs’ icily pointillistic acoustic organ. What follows is a battle royale between guitar gods Larry Coryell and Al DiMeola: the former’s insanely intricate and mercurial guitar solo versus the latter’s fleet-fingered, fuzz-toned curlicues of virtuosity. We get articulate wails galore from both of these prolix axe heroes in this duel for the (s)ages.

I bought my copy of Venusian Summer for $3 many years ago, but it still usually sells for under $10 in the US. So there’s really no excuse to not grip your own copy and cheaply ride the lightning out of this solar system. -Buckley Mayfield