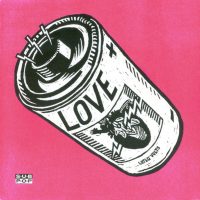 Love Battery are the semi-forgotten men of Seattle’s early-’90s rock explosion. And that’s not right. Too psychedelic for grunge purists despite having Sub Pop’s imprimatur and too grunge-y for psych-rock purists despite cutting a righteous cover of Pink Floyd’s “Ibiza Bar,” Love Battery never caught on like some of their Emerald City brethren: Nirvana, Mudhoney, Soundgarden, etc. But it was not for lack of quality songs and albums. Sometimes shit just doesn’t break for a band—even with major-label backing, which they received from PolyGram subsidiary Atlas after departing Sub Pop. (/sarcasm)

But Love Battery—who were named after a Buzzcocks song off 1978’s Another Music In A Different Kitchen, although they don’t really sound like that British pop-punk group—released at least one dynamite full-length: Dayglo. Now tragically out of print on both vinyl and CD (prices for the latter are outrageous), Dayglo holds its own with the strongest early-era Sub Pop releases: Bleach, Prison, Superfuzz Bigmuff, Pigeonhed, Severe Exposure, etc.

Right away on “Out Of Focus,” Love Battery establish the bossness of their twin-guitar attack, with Kevin Whitworth and Ron Nine’s radiant fuzz tones intertwining in perfect disharmony. The song moves with a juggernaut stateliness, exuding psychedelic vibes that sting rather than mollify. Nine’s exasperated vocals are like a less abrasive cousin to Kurt Cobain’s. He even had the Nirvana frontman’s blond hair, making Love Battery’s lack of commercial success seem like a cruel conspiracy. I mean, listen to “Foot,” with its speedy, surging rock geared to put said appendage to the pedal to the (heady) metal. More exhilarating than “Rusty Cage” and “Even Flow” combined, it should have been a hit, but maybe it was too exciting for radio. “Damaged” wows with a woozy slide guitar motif that leads into a riff/chord progression that alludes to Pink Floyd’s “Astronomy Domine,” and the Whitworth/Nine guitar army proves it’s just as mighty as that of Mark Arm/Steve Turner.

Talk about a strong opening triptych. But then “See Your Mind” raises the bar even higher. It’s pure fucking adrenaline, mercurial, revved-up biker rock with liquid acid in its gas tank. The way Nine and the band sing “mind” here will blow yours. By contrast, “Side (With You)” is a massive, lurching power ballad on which Whitworth peels off a wonderfully serpentine solo. Things return to uptempo fireworks with “Cool School (Trane Of Thought),” a slamming, turbulent tribute to jazz and Beatniks that sounds closer to James Blood Ulmer playing Black Sabbath’s “Paranoid” than to John Coltrane, Miles Davis, or Charlie Parker, all of whom are name-checked on this bad boy. The vicious coda will flip your wig and then incinerate it. “Sometimes” and “23 Modern Stories” prove that even Love Battery’s ballads hit with a bludgeoning beauty and a slurring majesty. “Blonde” boasts fantastic, swerving dynamics and melismatic guitar riffs with horn-like tones. It’s a real tour de force of their dueling guitar alchemy. By album’s end, you realize why Dayglo is an apt title; because this record stood out from Seattle’s grunge status quo, soaring above its muddy jams purling in the garden of sound.

The main goal of this review is to spur a quality label to reissue Dayglo on a physical format, with liner notes, previously unseen photos, bonus tracks… the whole (Ron) Nine. It’s too good and important to be relegated to the streaming services. Jonathan Poneman, white courtesy telephone… -Buckley Mayfield