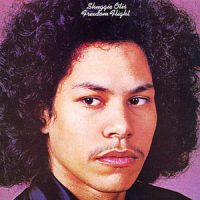 Shuggie Otis still isn’t as famous and celebrated as he ought to be. Although his discography is relatively small, his name should be uttered in the same reverent tones the listening public reserves for superstars such as Sylvester Stewart, Jimi Hendrix, and Prince.

Now, Otis’ 1970 debut LP proper Here Comes Shuggie Otis has some stellar moments, but Freedom Flight is where he really blossoms. He would follow it up in 1974 with another classic, Inspiration Information, before going many years without releasing new music. David Byrne’s Luaka Bop label revived interest in Otis’ mellifluous mélange of psychedelia, blues, and funk with its 2001 reissue of Inspiration Information that included four cuts from Freedom Flight. It was one of the best music-biz moves the Talking Heads frontman has ever made.

Otis certainly had connections to some of the top players in the biz thanks to his father, the R&B artist/bandleader Johnny Otis. But still, for a 17-year-old to create an album as ambitious and brilliant as Freedom Flight is astonishing. It’s no wonder legends such as Frank Zappa, Al Kooper, and the Rolling Stones wanted to tap the multi-instrumentalist prodigy’s talents.

“Ice Cold Daydream” is a fantastic opening number, complex yet catchy funk rock that could make Sly Stone do the splits out of respect. Shuggie’s guitar effects are sweet as hell, and he plays organ and bass like a badass, too. Somehow I’d gone my whole life not knowing about Mike Kowalski—who’s played with the Beach Boys, Nick Drake, and John Martyn—but he proves himself to be a truly funky drummer. Papa Johnny chips in with percussion, which was very nice of him.

Shuggie flexes his formidable blues muscles on “Me And My Woman” and “Purple.” Written by Gene Barge, the former song is about a roller-coaster romance and though it’s pretty straight-ahead, it’ll put serious lead in your pencil. (Does anyone still use this expression? No? Cool.) Shuggie plays guitar, bass, and keys, and his guitar solo is a thing of ornate beauty, while his rhythm guitar chikka-wakkas are nasty. “Purple” is a simmering, shimmering seven-minute blues stroll that one could imagine working well in a classy strip joint. Shuggie once again excels on guitar, bass, and organ and Jim “Supe” Bradshaw adds crucial harmonica accompaniment.

My two favorite tracks here are “Sweet Thang” and “Strawberry Letter 23.” The former was co-written with certified Dirty Old Man Johnny Otis and received high-powered help from George Duke on organ, Wilton Felder on bass, and Aynsley Dunbar on drums. This is swampy funk that’s greasier than Dr. John’s Gris-Gris in a New Orleans grease fire. “Sweet Thang” is so sexy, I can’t think of a metaphor or simile that’ll do it justice, but your libido will surely throb like it’s never throbbed before. “Strawberry Letter 23” is Shuggie’s most famous song, thanks to the Brothers Johnson’s glazed-soul cover that dominated radio in 1977—and justifiably so. Shuggie plays everything on it, and dozens of listens to his and the Brothers Johnson’s versions cannot diminish the elegant elation that this mellow, pastel soul gem induces. Shuggie’s sleigh and orchestral bells and his gilded, ascending guitar arpeggios lift this song to the seventh circle of heaven. It’s one of the purest expressions of enchantment ever put to tape, up there with Hendrix’s “Little Wing” and the Velvet Underground’s “Oh! Sweet Nuthin’.”

Finally, the nearly 13-minute “Freedom Flight” is a patiently unfolding, bluesadelic drift that’ll get you floating in the way that a Hendrix jam at its most blissed-out can do. Duke, Dunbar, and Felder appear again, but it’s Richard Aplanalp on tenor sax and oboe who steals the song. Aplanalp played on Bruce Palmer’s The Cycle Is Complete, and it shows. His blowing has that tender yet questing tone that suggests intimacy with the eternal. The band achieves a peaceful, easy feeling, in excelsis. “Freedom Flight” serves as an exclamation mark in lavender haze to an album that’s a manifesto of artistic adventurousness… created, I remind you, by a 17-year-old. -Buckley Mayfield